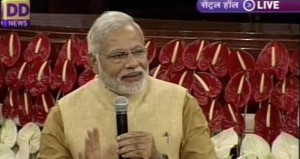 NEW DELHI : Days before he takes oath as India’s next prime minister, Narendra Modi said on Tuesday after being elected leader of the BJP parliamentary party that an era of responsibility had begun.
Addressing the party’s new MPs and other leaders in the central hall of parliament, Modi also said that the majority given to the BJP in the Lok Sabha was “a vote for hope and faith”. Modi, who was the party’s prime ministerial candidate, sought to underline that he should not be seen above the Bharatiya Janata Party (BJP).
He credited the BJP’s stunning electoral victory to the BJP’s organizational strength.  The Gujarat chief minister became emotional when he responded to veteran colleague L.K. Advani’s previous remarks that he (Modi) had done a favour by leading the BJP in the election.
“Please don’t use the word ‘kripa’ (favour),” Modi said. “A son doesn’t do a favour to his mother. A son works with dedication. I treat the BJP as my mother.”
The Veteran leader L.K. Advani leads National Democratic Alliance delegation, comprising BJP president Rajnath Singh, Shiv Sena chief Uddhav Thackeray and BJP leaders Arun Jaitley, Murli Manohar Joshi, Sushma Swaraj and Nitin Gadkari, to Rashtrapati Bhavan to meet President Pranab Mukherjee.