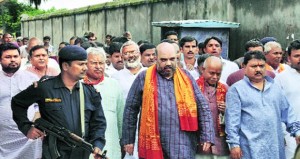 MUZAFFARNAGAR: On Thursday, Amit Shah, BJP general secretary and Narendra Modi’s man in Uttar Pradesh, met leaders of the Jat community at Raajhar village, 40 km from Muzaffarnagar, and delivered a speech brimming with vitriol. With him was BJP legislator Suresh Rana, who is accused of instigating the riots last year
“This election is about voting out the government that protects and gives compensation to those who killed Jats,” Shah said. “It is about badla (revenge) and protecting izzat (honour).” The village is politically significant because it is the base of the Batteesaa Khap, a sub-group of the Jat community that dominates the sugarcane belt of western Uttar Pradesh.
Not many in Muzaffarnagar knew that Amit Shah was in town. While travelling, he usually stays away from the main roads, choosing instead to travel through smaller, less-frequented lanes. Only the Gujarat Police vehicle that follows him everywhere gives away his presence.On Friday, after spending the previous night at a hotel just outside Muzaffarnagar, where the entire second floor was booked for him and his supporters, he met by turn the leaders of three communities — Gurjjars, Rajputs and Dalits — at a farmhouse in the town’s Gandhi Colony. Here too, he spoke of “badla”.
“A man can live without food or sleep. He can live when he’s thirsty and hungry. But when he’s insulted, he can’t live. Apmaan ka badla toh lena padega,” he said.  A senior BJP leader who handles Shah’s campaign in western Uttar Pradesh, said, “The idea is to meet some influential people who will then go and spread the word in their communities. That works better than rallies.”
At the Muzaffarnagar farmhouse, he spoke about the “problems facing the country”. Apart from price rise, he said, “our country’s boundaries are being breached, heads of soldiers are being chopped off and then played football with, Bangladeshis are infiltrating India, our women aren’t safe because the government is too busy with other things, and riots keep happening in Uttar Pradesh.”
“Kisi maa ke laal mein himmat nahin hai ki woh Gujarat mein dange karaye… wahaan Narendra Modi ki sarkar hai (No one has the courage to instigate riots in Gujarat, Narendra Modi runs the government there),” he told Dalits who had just spoken against the Samajwadi Party government’s handling of the Muzaffarnagar riots.
Under Mulayam Singh Yadav, he said, certain communities had been “rendered second-class citizens” because of the “favourable treatment he gives to minorities”. A few minutes later, addressing Rajput leaders, he said, “Mullah Mulayam’s government” should be booted out because they “have allowed people who kill cows to prosper. In Gujarat, we don’t have any water, but we have milk. Here, you’re blessed. You have so much water. But all your cows are being killed, all your animals are ending up at the butchers’,” he said