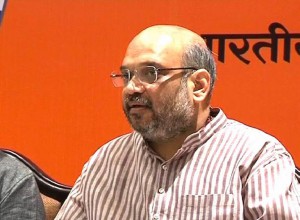 NEW DELHI : BS Yeddyurappa’s rehabilitation in the BJP is now complete, with the Karnataka strongman being inducted as a vice-president in party chief Amit Shah’s new team.Mr Yeddyurappa, 71, is one of 11 vice-presidents that Mr Shah has appointed in what the BJP has described as “a new, young team.” The party’s JP Nadda said, “60% of the new office-bearers are under 50.” Very few are over 60 years of age.
But 34-year-old Varun Gandhi has lost the post of General Secretary that he was handed last year. The MP from Sultanpur in Uttar Pradesh has not been given an alternate party post.In a big reshuffle, the new BJP chief has also named Bandaru Dattatrey and Mukhtar Abbas Naqvi as vice-presidents. His new team will have eight general secretaries, including Rajiv Pratap Rudy from Bihar and Ram Madhav, the Rashtriya Swayamsevak Sangh or RSS spokesman who was recently deputed to the BJP.
Amit Shah, 51, took over as BJP chief last month after Union Home Minister Rajnath Singh stepped down in deference to a party rule that no member must hold dual positions. Mr Shah’s appointment was ratified at a meeting of BJP leaders last week.  He in the meantime held many consultations with Prime Minister Modi and the RSS, which is the BJP’s ideological mentor, to structure his team. Mr Shah is Mr Modi’s closest aide and the RSS reportedly overcame serious reservations over two Gujarat leaders holding the two top posts to facilitate what it hopes will be seamless synergy between the BJP and the government it leads.
Mr Shah’s appointment signaled Mr Modi’s complete control over the party after the spectacular victory he scripted for it in the national elections this year. So does Mr Yeddyurappa’s appointment today; only two years ago he had quit the BJP after the party forced him to resign as Karnataka chief minister over corruption charges.He rejoined the party last year after Narendra Modi took charge of the BJP’s campaign for the general election.
Days after being ratified as the Bharatiya Janata Party’s president, Amit Shah on Saturday announced the list of party’s new office bearers which includes several members under the age of 50. Apart from Mr Yeddyurappa, Satpal Malik, MA Naqvi, P Ruppala, Prabhat Jha, Raghuvar Das, Kiran Maheswari, Vinay Sahasrabuddhe, Renu Devi and Dinesh Sharma. Meanwhile, the list of 8 general secretaries includes JP Nadda, RP Rudy, Muralidhar Rao, Ram Madhav, Saroj Pandey, Bhupendra Yadav, RS Kateria and Ram Lal.
Besides these, Shahanawaz Hussain, Sudhanshu Trivedi, Meenakshi Lekhi, Sambit Patra, MJ Akbar, Nalin Kohli, BS Shastri, GVLN Rao, Anil Baluni and L Kumarmangalam will be party’s national spokespersons. “The new BJP team is experienced and 60 percent of its office bearers are under 50. We have included the representatives of all the states and communities,” said BJP leader JP Nadda.
While  Abdul Rashid Ansari will continue as the BJP Minority Morcha chief, BJP leader Anurag Thakur remain Bharatiya Janata Yuva Morcha chief.