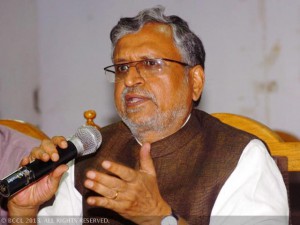 PATNA: Asserting that the alliance was more important than the chief ministerial candidate, Bharatiya Janata Party (BJP) leader Sushil Modi on Wednesday said the people of Bihar would never accept Nitish Kumar as their Chief Minister as he has joined hands with RJD supremo Lalu Prasad Yadav and Congress president Sonia Gandhi.
“Who will be the Chief Minister is not important to the people, what matters to them is the people in the alliance. Nitish Kumar is the chief ministerial candidate, but he is with Lalu Yadav and Sonia Gandhi. So, what is important is who is in your team. If you have people like Lalu Yadav, Sonia Gandhi and Rahul Gandhi in your team then the people of Bihar will never accept it,” Modi said in an exclusive interview with a News Agency.
He said the people of Bihar want a government, which works together with the Centre.”They do not want a government that fights with the Centre, but one that works for the state’s development along with the Centre. We are telling the people that they have seen 35 years of the Congress, 15 years of Lalu-Rabri rule and 10 years of Nitish Kumar, so they should give us one chance to run the government,” he said.
The BJP leader also hinted at the differences between Lalu and Nitish, saying both leaders have not shared the stage during the campaigning so far.Polling for the third phase of Bihar Assembly elections began at 7 am amid tight security arrangements today.

Fifty constituencies spread over six districts are going to polls in this phase. Polling will conclude at 5 pm in 40 constituencies, while in the remaining 10 Naxal-affected constituencies it will end at 4 pm. Over one crore 45 lakh electorates will decide the electoral fate of 808 candidates, including 71 females.