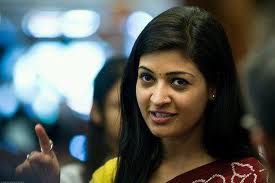 New Delhi : Alka Lamba, a Delhi politician, began trending on Twitter soon after reports that she is quitting the Congress to join the Aam Aadmi Party.Ms Lamba, 38, is a former president of the National Students Union of India or NSUI, the Congress party’s student wing. She had unsuccessfully contested assembly elections in 2003.
On Thursday, she said she had met AAP leader Yogendra Yadav to “convey her desire to join” his party. She also said, “There are few in the party (the Congress) who are still taking decisions behind closed doors, whereas AAP asks people before taking decisions.”
Ms Lamba said she had served the Congress in various departments for 20 years, “but somewhere I thought something was missing.” The Congress has, however, attempted to brush aside her move as a non-event, with partymen pointing out that she hasn’t held a post in a long time. Congress leader Beni Prasad Verma even asked, “I have heard her name for the first time. Who is she?”
Mr Yadav confirmed that he had met Ms Lamba along with members of several other parties. AAP sources said that while all are welcome to join it, a decision on how best to utilize them is decided after a primary member has been engaged with the party for a few months.
The number of people queuing up to join AAP has reportedly multiplied after its spectacular performance in the Delhi elections.Party chief Arvind Kejriwal will take oath as Delhi’s new chief minister at noon on Saturday. He will head a minority government with support from the Congress, which was reduced to a humiliating eight MLAs in the Delhi Assembly in this month’s election.
The unlikely alliance – the one-year-old AAP fought the Delhi election on the promise that it would throw out the Congress government – already seems tenuous with the Congress issuing statements that its support cannot be taken for granted.NDTV.