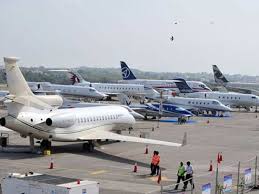 NEW DELHI: The Airports Authority of India (AAI) on Thursday said it will require investments to the tune of $12 billion (Rs ​80,028 crore) for construction of new regional airports and expansion of existing ones over the next seven years.
The government-run body also plans to hold a meeting with various state governments once the draft of civil aviation policy is finalised to discuss airport requirements there going forward, AAI Chairman R K Srivastava told reporters on the sidelines of an aviation conference.
Airports Council International (ACI) in association with International Civil Aviation Organisation has organised a two-day conference on the theme “Investing in Airports- Economic Oversight and Regulations” to discuss sustainable growth for the airports globally.
Srivastava said besides development of new regional airports, a number of the existing airports including Pune, Guwahati, Trichy, Jammu, Srinagar and Patna, among others, would soon reach optimum capacity and would have to be expanded to meet the increased demand.
All this will require an investment of $12 billion (Rs 80,028 crore) over the next seven years, Srivastava said.He said that part of these funds will come through internal accruals and part of it will be raised through the market. “We will have to go to the market to raise funds from the third year of the seven year period,” he said.