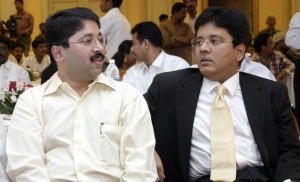 NEW DELHI : A Special 2G court on Monday reserved for October 29 its order on the issue of taking cognizance on CBI’s charge sheet in the Aircel-Maxis deal case in which former telecom minister Dayanidhi Maran, his brother Kalanithi Maran and others are named as accused.
“Arguments on the point of cognizance heard. Put up for order on October 29,” Special CBI judge O P Saini said.During the brief hearing, CBI’s prosecutor K K Goyal told the court that cognizance should be taken on the charge sheet and prima facie a case is made out against all the accused. “Our prayer is that cognizance should be taken. This case involves investigation in foreign countries as well. Prima facie case is made out against all the accused persons and sufficient grounds are there against them,” the prosecutor said.
Meanwhile, the judge asked the prosecutor as to whether all the documents related to the case have been filed before the court.Responding to the court’s query, the prosecutor said they have filed the relevant documents before the court and their investigation in the case is still going on.
On August 29, CBI had filed the charge sheet in the case against Dayanidhi, Kalanithi and six others, including four firms.Besides the Maran brothers, the CBI has named Malaysian business tycoon T Ananda Krishnan, Malaysian national Augustus Ralph Marshall and four firms – Sun Direct TV Pvt Ltd, Maxis Communication Berhad, Astro All Asia Network PLC and South Asia Entertainment Holding Ltd – as accused in the case.They have been chargesheeted for the offences punishable under section 120-B (criminal conspiracy) of the IPC and under relevant provisions of the Prevention of Corruption Act.
The 72-page charge sheet includes the names of 151 CBI witnesses and a set of 655 documents, on which the agency has relied upon in its investigation.On September 11, CBI had told the court that Dayanidhi had “pressurised” and “forced” Chennai-based telecom promoter C Sivasankaran to sell his stakes in Aircel and two subsidiary firms to Malaysian firm Maxis Group in 2006.
CBI had said, “Several issues relating to Sivasankaran’s firms were kept pending by Dayanidhi Maran, who was the then Telecom Minister, and no decision was being taken on them.“There was strangulation of these three companies and they were unable to perform their business,” the agency said.
It had said that as soon as Maxis Group bought Sivasankaran’s firms, all the pending issues were cleared by Dayanidhi giving undue benefit to the Malaysian company.The Malaysian firm was favoured by Dayanidhi and granted licence within six months after the take over of Aircel in December 2006, it had said.
Ex-Telecom Secretary J S Sharma, who has since died, has also been named in the CBI’s charge sheet. However, his name has been put in a column of the accused against whom trial cannot proceed.