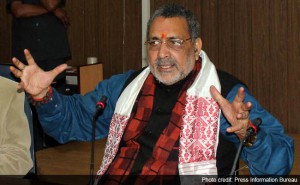 NEW DELHI: Giriraj Singh, a minister known to be a serial offender with hate remarks, has hit a new low with deeply racist comments about Congress chief Sonia Gandhi.”If Rajiv Gandhi had married a Nigerian lady and not a white-skinned woman, then would the Congress have accepted her leadership?” Mr Singh, 63, said on Tuesday, laughing at his own joke.
The poor excuse that he was only chatting informally failed to stop the tide of anger and revulsion that swamped him and embarrassed his party, the BJP. After a senior union minister reportedly reprimanded him, Mr Singh today said: “People say all kinds of things off the record. But if Sonia Gandhi and Rahul Gandhi were hurt by my remarks, then I regret them.”Nigeria has said it will formally complain to the foreign ministry. The Congress said the remarks were bordering on insanity.
“The comments reflect the lack of moral fibre in the BJP. It appears that the continuous quest to appease Prime Minister Narendra Modi has made him lose his balance,” said Congress spokesperson Randeep Singh Surjewala.
A first time MP from Nawada in Bihar, Giriraj Singh was made a minister of state in November despite his notoriety. Before last year’s national election, he had said that critics of Mr Modi, his party’s then prime ministerial candidate, should go to Pakistan.
“He is a serial offender. What is the PM’s Mann ki Baat on this? His silence reflects connivance and encouragement,” said CPM leader Brinda Karat.

Giriraj Singh belongs to the politically powerful Bhumihar community in Bihar and was among the first to back Mr Modi’s name for prime minister. He has emerged as a big headache for a government that wants to highlight its agenda of economic reforms and development.Till now, Mr Singh has largely been spared any serious action by the party. Sources say that may change when the BJP completes one year in power in May and reassesses some ministers.