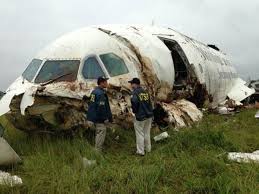 DUSSELDORF (FRANKFURT) :  After an Airbus operated by Lufthansa’s Germanwings airline crashed in the French Alps on Tuesday, killing all 150 people on board, the Dusseldorf Airport in Germany has seen long queues, with passengers lining up to rebook their flights.
Several passengers had booked Germanwings flights, but many of these have been cancelled after crew members declared themselves unfit to fly after the crash.
The management of Germanwings has termed the crew members’ decisions as “personal” and “understandable”.  It was more important to ensure psychological assistance to the crew, said senior airline executives.”We understand that on a day like today, they wouldn’t feel able to fly,” Germanwings’ Managing Director Thomas Winkelmann told German broadcaster ZDF.
“It is now more important to ensure psychological assistance if needed. And we will get back to a full flight operation as soon as possible then. But for me, this is rather secondary now,” said Lufthansa CEO Carsten Spohr in Frankfurt.
The Germanwings Flight 4U 9525 from Barcelona to Dusseldorf lost radar contact with French air traffic control on Tuesday morning. Its wreckage was found in a remote part of the French Alps, close to the Franco-Italian border. The plane had rapidly lost altitude from about 36,000 feet to 6,000 feet just before it crashed.
The aircraft was an Airbus A320, which had been passed on to Germanwings by its parent carrier Lufthansa. It was 24 years old and among the oldest operational aircraft of its type, according to Airbus.
In November, a Lufthansa flight from Bilbao to Munich lost altitude after sensors iced over and the on board computer, fearing the plane was about to stall, put the nose down. As a result, the European Aviation Safety Agency ordered a change in procedure for all A320 jets.

Asked whether something similar could have occurred on Tuesday, Mr Winkelmann said, “At this time this evening, we are ruling out a possible cause in this area.”