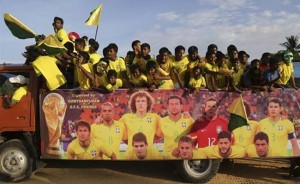 PANAJI : Six Goa MLAs who are at the centre of a major controversy over their planned trip to Brazil where the FIFA World Cup began on Thursday night have now decided that they will undertake the travel at their own expense. “We will bear the cost ourselves. We have realized we should not take tax payers’ money for this,” said Goa Fisheries Minister Avertano Furtado, one of the six leaders who will travel to Brazil.
After the BJP government in Goa sanctioned a Rs. 90 lakh junket for the MLAs and pegged it as a “study tour,” the Congress alleged that Chief Minister Manohar Parrikar was misusing public funds and demanded that the trip be scrapped.”Yesterday Narendra Modi spoke in Parliament about sanitation, house, and water for poor people and today his own government in Goa is investing 89 lakhs so that his MLAs can go and watch a football match,” the party’s Rashid Alvi said on Thursday.
A livid Goa Congress leader Durgadas Kamat called it an “utter loot of the state treasury.”Sources in the Goa government argued that the trip is a “study tour” for politicians of a state that regularly holds sporting events. They pointed out that no bureaucrats were being sent. Only politicians who “bring the vision.”Defending the trip the Chief Minister had said, “The decision has been taken in the interest of Goa, football is our state sport. Some MLAs on the team are ex-footballers.”
The delegation has no sportsman or anyone connected with football either, though the tiny state has given India some of its leading national football stars. Two of Goa’s former footballers, Bruno Coutinho, and Brahmanand Shankhwalkar, both Arjuna award winners, had reportedly asked if they could be sent to Brazil to watch the tournament. Sources said Mr Coutinho’s name was on an initial list for the trip but was dropped.
Apart from the Fisheries Minister, Goa Sports Minister Ramesh Tawadkar, Power Minister Milind Naik and three MLAs will travel to Brazil to watch matches to be held at the end of this month.
The final of the tournament will be played in Rio on July 13. India is ranked a poor 154 in world football, but lakhs of fans eagerly await the World Cup held every four years. Brazil defeat Croatia in the opening match on Thursday.