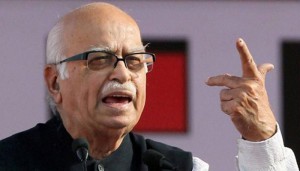 AHMEDABAD: Veteran BJP leader LK Advani here on Wednesday lavished praise on Narendra Modi as the Prime Minister but said the country hadn’t seen another Premier like Atal Bihari Vajpayee.
“I feel immense pride in saying that Narendra bhai has showed wonderful ability (as Prime Minister). I am saying with pride that Narendra bhai is working with a sense of responsibility and has won the entire country’s admiration,” Advani said addressing the party workers here.
“For the Prime Minister, it is not enough to rule the country effectively but it is also necessary to establish relationships with other countries. As Modi won over the people in the polls, he has now won over the entire world,” Advani said.
“When Narendra bhai won the election, there was a feeling that what will happen, how will he maintain relations with others. But he shouldered the responsibility so well. Not only he, but the others whom he delegated responsibilities have also done great work. I am very happy with him,” Advani said.
But he also said that “in the history of India, there has been no other Prime Minister like Atal Bihari Vajpayee. Nobody can imagine the degree of respect Vajpayee got”.
Advani had opposed Modi’s elevation as the BJP campaign committee chief and declaration as the Prime Ministerial candidate. But later he praised Modi on many occasions.
Advani also said that the party workers should be aware of BJP’s and RSS’s history and should not forget the contribution of leaders like Shyama Prasad Mookerjee, Nanaji Deshmukh and Kushabhau Thakre.