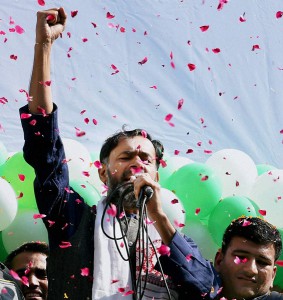 NEW DELHI : Buoyed by its spectacular victory in Delhi Assembly polls, the Aam Aadmi Party is now planning to make itself a significant political force in at least four major states in the next five years without entering into any “arrangements of convenience” with any regional party.
Senior party strategist and ideologue Yogendra Yadav said in the long term, AAP wants to emerge as a principled force in national politics and the party was working on mid-term and long-term goals in this regard. “We are not a regional party. In the long term we want to be a national alternative. That is why we chose Delhi consciously. We want to emerge as a principled force in national politics. In next 3-5 years, we want to become viable in more states than Delhi and Punjab,” Yadav told to News Agency.pti.
Terming coalitions like the Third Front as “arrangements of convenience”, he said AAP will not join any such groupings. He also ruled out having any understanding with parties like Trinamool Congress and JD(U) which had extended support to AAP in the Delhi polls. “They have not sought political support and even we did not extend political support to them. It was merely a gesture on their part based on their own strengths and weaknesses.
What they do not realise that we are anti-political establishment,” he said.
A noted political scientist, Yadav said the AAP’s target was to capture more than 20% vote-share in each of the states where the party wants to become a viable alternative as part of its medium-term expansion drive. He refused to name the states where AAP wants to spread wings when asked but said their selection will depend on space for potential opportunity and organisational strength.
On whether AAP would contest the Bihar assembly elections later this year and polls in West Bengal next year, he did not give a direct answer. Punjab, where AAP had won four seats in the 2014 Lok Sabha elections, will be a major focus area with the party deciding to fight the 2017 assembly polls in the state with full vigour.
Commenting on AAP’s sweeping victory in the Delhi polls, Yadav said the scale of the win has put enormous pressure on the Arvind Kejriwal-led government and exuded confidence of it living up to people’s expectations.
“The pressure is huge. Nothing is heavier than burden of people’s expectations. The challenge is to perform. However, if you manage to raise the living standards of people even by a little, they will be happy. There are big challenges in governance because Delhi is not a normal state. People also expect different standards of probity from us as we represent clean politics,” he said.
Yadav, who is also a psephologist, said since the Opposition was down to three seats, the AAP government should be even more “cautious” in listening to voices of Opposition both inside and outside the Assembly.
Contrary to Kejriwal’s views that party should not have contested in over 400 seats in the Lok Sabha polls, Yadav felt it helped AAP in spreading its organisation at the district level in most of the states. Kejriwal, on many occasions, had said that it was a mistake to contest in so many constituencies.
Yadav strongly denounced attempts to tag AAP as leaning towards Leftist ideology and said when a new force arrives, the first temptation is to put into a “box of left to right”. He said AAP represents all sections of the society and believes in coming out with practical solutions to various problems. “There is an unmistakable element of class politics in what we have done. That is why probably people try to box us with Left,” he said.