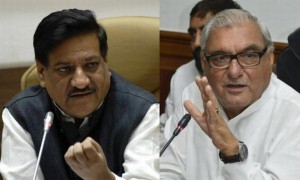 NEW DELHI : In the run-up to the assembly elections in Maharashtra and Haryana, both Mr Chavan and Mr Hooda came in for much criticism
If the results of the assembly elections are an indicator, former Maharashtra Chief Minister Prithviraj Chavan has done better than his party colleague, the outgoing Haryana Chief Minister Bhupinder Singh Hooda.
Even though the 15-year-old Congress-NCP alliance in Maharashtra broke just before the elections, the Congress managed to win half the number of seats it held, going from 82 to approximately 43; in Haryana, the party won a little over a third the number of seats it held, slipping from 40 to 15.
In Haryana, the Congress’s lost a humongous 15.02 per cent — from 35.08 per cent to 20.6 per cent. In Maharashtra, the combined Congress-NCP vote share (to take them separately would be deceptive, as both parties contested virtually double the number they individually used to cover earlier) has gone from 37.38 per cent in 2009 (Congress: 21.01 per cent and NCP: 16.37 per cent) to 35.2 per cent (Congress: 17.9 per cent and NCP 17.3 per cent).
Ahead of the assembly elections, both Mr Chavan and Mr Hooda came in for a great deal of criticism, even in their own parties, though for very different reasons.Shorn of election rhetoric, and going strictly by economic and social indicators, both states prospered under Congress rule. Both Chief Ministers belonged to dominant communities in their own states — Mr Chavan a Maratha, Mr Hooda a Jaat – and can boast of Congress lineage. Mr Chavan’s parents were both Congress MPs; Mr Hooda’s father was a Constituent Assembly member and a party stalwart.That, of course, is where the similarities end.
Mr Prithviraj Chavan — a central minister at the time — became chief minister only in November 2010, succeeding Ashok Chavan, who had been named in the Adarsh housing cooperative scandal: he, therefore, came in late in the Congress-NCP government’s15 year reign of the state.Mr Hooda, on the other hand, had been chief minister for an unbroken decade, starting in 2005.
Mr Chavan, the classic Mr Clean, lived up to that image, taking on the builders’ lobby — a brave if foolhardy act —tried to reform the government education system and took several measures to protect the state from drought. But his efforts to tackle corruption by cabinet colleagues, largely from the NCP, and end the system of patronage was not taken kindly by his ministerial colleagues. He was described as ineffective, with party leaders sniffing, “It’s not enough to be clean.”
Mr Hooda, the quintessential politician, is built in a different mould. An effective administrator, he, however, hit the headlines for all the wrong reasons — for ”helping” Sonia Gandhi’s son-in-law Robert Vadra strike “sweet” land deals in Haryana, backing khap panchayats and not tackling atrocities against dalits vigorously. But in a pre-election poll, he emerged as the state’s most popular chief ministerial candidate.
In the end, Mr Chavan’s Mr Clean image – along with the break with the NCP that has now even expressed an interest publicly to back a BJP government in Maharashtra, largely to protect the business interests of its members – probably helped check the downslide in Maharashtra, and ensured that the BJP failed to get a majority in Maharashtra. And Mr Hooda’s venal persona, even though he was evidently much more of a go-getter, perhaps damaged the party more in Haryana.