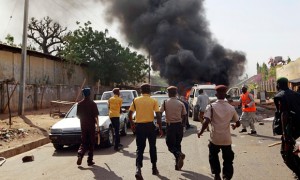 A suicide bomber has killed at least 21 people at a Shia Muslim procession in northern Nigeria.The attack happened in the village of Dakasoye, about 13 miles (20 km) south of Kano, during a march by followers of the Islamic Movement of Nigeria.
“Our procession came under a suicide attack,” said Muhammad Turi, who was leading thousands of people from Kano to Zaria, in the neighbouring state of Kaduna.
“We lost 21 people and several others have been injured. We are not surprised that we’ve been attacked because this is the situation all over the country. This will not deter us from our religious observance. Even if all of us were bombed the last person will carry on with this duty.”
A reporter in Dakasoye said the road was stained with blood but the worshippers continued their march. Most were wearing black and carrying flags or portraits of the prophet Muhammad’s grandson Hussein and were flanked by security guards.
One organiser, who asked to remain anonymous, said the bomber ran into the crowd and detonated his explosives. “He was dressed in black like everyone else. His accomplice was initially arrested and confessed they were sent by Boko Haram,” he said.
“They were part of the young men abducted by Boko Haram in Mubi last year and taken to Sambisa forest where they were given some military training. They were sent to Kano 11 days ago and kept in a house specifically for this attack.”
The bomber detonated the device after realising his accomplice had been arrested, the organiser added.The worshippers were on a trek to Zaria– where the Islamic Movement of Nigeria’s leader, Sheikh Ibrahim Zakzaky, is based – to mark the 40th day of Ashura.

Their planned arrival on 3 December will coincide with a gathering of pilgrims at Hussein’s tomb in the Iraqi city of Karbala.Boko Haram, the radical Sunni jihadis who want to create a hardline Islamic state in north-east Nigeria, has previously been blamed for attacks on Shias in the region. It sees Shias as heretics who should be killed.
Last November at least 15 people were killed and about 50 others injured after a suicide bomber targeted the Shia festival of Ashura in Potiskum, Yobe state. Ashura marks the death of Hussein.
In April a suicide bomber blew himself up as Shias prayed at an open-air mosque in Potiskum. Three worshippers were wounded in the attack.
Young female suicide bombers kill 15 in Nigeria market attack
Read more .Last Sunday a bomber killed eight in the north-eastern city of Maiduguri, and a day earlier four teenage girls blew themselves up in northern Cameroon, killing five.
Boko Haram’s six-year insurgency has left at least 17,000 people dead and made more than 2.6 million homeless. It has increasingly used suicide bombers against civilian targets since the start of a military offensive this year that has pushed them out of controlled territory.
Nigeria’s president, Muhammadu Buhari, has given his military commanders until next month to end the conflict, but there are fears that suicide and bomb attacks may persist.
On Thursday senior military, security and intelligence figures questioned the deadline, saying it was unrealistic because of the wave of bombings in the region.