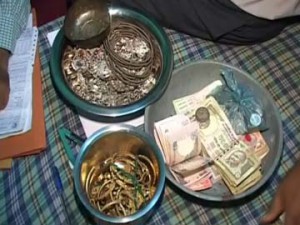 GWALIOR: For 30 years, Kuldeep Yadav has been a peon at a bank in Madhya Pradesh. This morning, raids at three of his six homes in Gwalior revealed assets worth Rs. three crore and counting.Mr Yadav, who is in his 40s, has worked at the Cooperative Bank since 1983, without a single promotion. His quiet presence apparently concealed wealth that could leave the top executive in his bank in the shade.
In raids that began at 3 am this morning, the Lokayukta or anti-corruption police have found documents for a duplex bungalow, five big houses, two luxury cars, cash, jewellery, insurance policies worth over four lakhs, land and bank lockers.The raids are likely to continue tomorrow. Officials expect Mr Yadav’s wealth estimate to rise to around seven crores by the time they finish.
“His assets are almost 200 per cent of his income,” said senior Lokayukta official Surendra Rai Sharma.It was an anonymous complaint that tipped off the police about Mr Yadav’s undetected millions. He was out of town when the raid team arrived at his doorstep.The police said it was remarkable that such corruption went unnoticed for so many years; at a salary that is not more than Rs. 20,000 a month, Mr Yadav couldn’t possibly have made more than Rs. 20 lakh in his years at the bank.