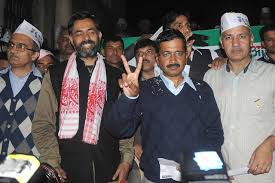 NEW DELHI: In a secretly-taped phone conversation last week, Arvind Kejriwal,  Chief Minister of Delhi, is heard abusing his party colleagues Prashant Bhushan and Yogendra Yadav, and threatening to exit the Aam Aadmi Party with his 67 law-makers from Delhi. “Any other party would have thrown them out,” Mr Kejriwal can be heard saying to a supporter; the conversation has been leaked as part of a bitter internal feud that has seen rival camps accuse each other of lies and forgery.
The party has not questioned the authenticity of the recording. “In anger, things are said, said AAP leader Ashutosh. “When we get angry and lose our temper, we use language that should not be used,” he added.
But what the ugliness underscores is that the crisis in India’s youngest party, which swept to power in Delhi just two weeks ago with a record win, appears to have breached the point of no-return.
Tomorrow, the party’s national executive council of about 400 members will meet to decide the future of Mr Bhushan and Mr Yadav, who claim they are being forced out of AAP by Mr Kejriwal for demanding more transparency and internal democracy. Mr Kejriwal is Convenor of AAP; his supporters insist that the rebels want him removed from the top post of the party.
“Why is it that if we raise any questions at all, our intent is questioned?” Mr Yadav asked at a press conference today. “If the five points of reform we have raised are accepted, we will resign from all bodies of the party,” Mr Bhushan said.  Among their demands is a devolution of power to AAP branches in different states, and an investigation by the party ombudsman against party members accused of graft.
Both Mr Yadav and Mr Bhushan are expected to attend tomorrow’s conclave.  Last night, AAP spokespersons confirmed that 10 days of negotiations had ended without a compromise being brokered.