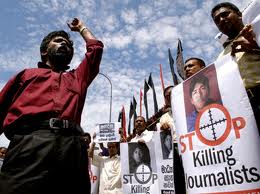 PARIS: Attacks on journalists have grown more barbaric and kidnappings have soared, Reporters Without Borders said Tuesday, after a year when violence against the media took centre stage and 66 reporters were killed.The beheading of James Foley and Steven Sotloff by the Islamic State group highlighted the extreme danger journalists face in covering modern conflicts.
“Rarely have reporters been murdered with such a barbaric sense of propaganda, shocking the entire world,” said Reporters Without Borders in their annual report released Tuesday. There was a slight drop in the number of murdered journalists — down from 71 last year — thanks largely to fewer deaths in countries “at peace”. A total of 720 reporters have been killed since 2005.
But kidnappings soared to 119 — up 37 percent on last year — thanks to the tactics of separatists in eastern Ukraine and militants operating in the Middle East and North Africa.Of those kidnapped, 33 were in Ukraine, 29 in Libya and 27 in Syria. Forty are still being held. “Local journalists pay the highest price, representing 90 percent of those abducted,” the report emphasised.
“Of the 22 journalists currently being held by armed groups in Syria, 16 are Syrians. All of the eight journalists currently held hostage in Iraq are Iraqis.”Reporters Without Borders highlighted several cases of journalists punished by their governments, including that of Raef Badawi, a Saudi citizen-journalist who won the charity`s Press Freedom Prize this year and was sentenced in September to 10 years in prison and 1,000 lashes for “insulting Islam” with his views on the Liberal Saudi Network.
It also highlighted the case of Khadija Ismailova in Azerbaijan — “now Europe`s biggest prison for media personnel”. Her work on government corruption has made her a target of smear campaigns, blackmail and spurious legal charges.
“Now she is being held on the absurd charge of `pushing` a former colleague to attempt suicide, a charge that carries a possible sentence of three to seven years in jail,” the report said.Worldwide, a total of 178 professional journalists were in prison as of December 8, the same number as last year.
China is the world leader in imprisoning journalists, with 33 currently behind bars, followed closely by Eritrea (28) and Iran (19).
Among the high-profile targets is 70-year-old Gao Yu, who won UNESCO`s World Press Freedom Prize in 1997. Having already spent seven years in prison in China, she is again on trial for “divulging state secrets” to a German broadcaster.Conflicts also led to large numbers of journalists fleeing their homes. Forty-seven Libyan and 37 Syrian reporters fled their homeland in the past year. A crackdown on privately-owned Ethiopian media drove 31 journalists into exile.
Beatings and rough handling were most common in Ukraine, followed by Venezuela and Turkey — a symptom of the targeted violence used by police in attempting to suppress protests in those countries this year. The report “highlights an evolution in the nature of violence against journalists and the way certain kinds, including carefully-staged threats and beheadings, are being used for very clear purposes,” it said.
“The murders are becoming more and more barbaric and the number of abductions is growing rapidly, with those carrying them out seeking to prevent independent news coverage and deter scrutiny by the outside world.”