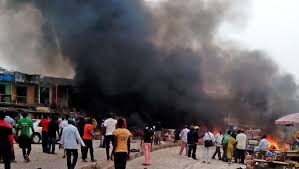 In Nigeria, two female suicide bombers blew themselves up in a refugee camp, killing at least 58 people in Dikwa, 85 kilometres northeast of Maiduguri. Officials said, a third woman bomber was arrested and has given officials information about other planned bombings that helped them increase security at the camp. Some 78 people are being treated for wounds from the twin explosions that occurred Tuesday morning in a camp of some 50,000 people driven from their homes by the Boko Haram.