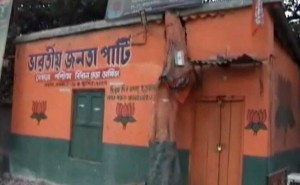 KOLKATA: A 17-year-old boy has been arrested for allegedly raping a five-year-old girl in Kolkata on Friday.The alleged crime took place at the BJP’s ‘mandal’ or branch office in Behala in the city’s south.
Police say the accused is the son of a shop owner located next to the BJP’s office. The keys to the BJP office were kept at this shop.The child missing around 3 pm, prompting the mother and neighbours to look for her. When they knocked at the BJP’s branch office door, the boy opened it and the girl ran out.
The mother took the child home but then rushed to the Behala police station after she found the girl’s underclothes blood-stained.
The police immediately launched a hunt for the boy, found him and arrested him on the basis of a complaint filed by the parents.

The child was admitted to hospital for medical tests and treatment. “Doctors have confirmed bleeding injuries,” said the Deputy Commissioner of Police (Kolkata South West), Rashid Munir Khan.
BJP spokesman Ritesh Tewari said, “We condemn the incident. The guilty must be punished.”Trinamool MP Derek O’Brien had only one word in condemnation. “Terrible,” he said.Some angry locals tried to break down the door of the BJP branch office but were stopped by others.