NEW DELHI : Mamata Banerjee, West  Bengal Chief Minister, appears to have lost none of the momentum of her massive victory in the state election in 2011. In the first national election she is contesting since then, she is likely to get 28 of the state’s 42 national seats according to NDTV’s opinion poll.Ms Banerjee decimated the Left in the last state election, ending more than three decades of its uninterrupted run in Bengal. The Left gets nine seats, according to the NDTV poll -six less than in the national election of 2009.Ms Banerjee’s Trinamool Congress gains a total of nine seats.  The Congress gets five.  The BJP gets none. 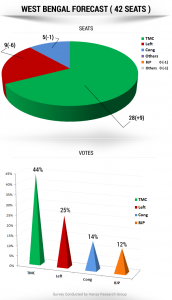