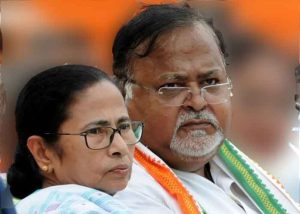 NEW DELHI / KOLKATA: West Bengal Chief Minister Mamata Banerjee broke her silence today on her minister Partha Chatterjee’s arrest two days ago. “I don’t support corruption or any wrongdoing,” she said, appearing to distance herself from the Trinamool Congress leader she once counted among her closest aides.Mamata Banerjee said. Mamata Banerjee had not said a word earlier on the arrest and has ghosted Partha Chatterjee.But the Chief Minister also said the “BJP is wrong if it thinks it can break my party using agencies.”

Partha Chatterjee, the Bengal Industries Minister, was arrested on Saturday on money-laundering charges linked to a school jobs scam. He was accused of a role in allegedly illegal appointments of schoolteachers and staff in government-run schools when he was Education Minister. Around ₹ 20 crore in cash was found from the house of a close associate of Partha Chatterjee, Arpita Mukherjee. Images of mountains of cash flashed on TV screens. The minister was arrested after midnight. The Enforcement Directorate says the minister was in contact with Ms Mukherjee and that the cash found in her home was “proceeds of crime”.
“If anyone is found guilty, he or she must be punished, but I condemn any malicious campaign against me. The truth must come out, but within a time-frame,”  Mr Chatterjee, 70, made three calls to the Chief Minister after his arrest but all three went unanswered, an “Arrest Memo” revealed. He had chosen Mamata Banerjee for his call to a “relative/friend whom the person taken in custody intends to inform”. His first call to her, after his arrest at around 1.55 am, was made at 2.33 am. He called again at 3.37 am and 9.35 am, but without luck.
The Trinamool Congress had denied the calls. The party’s Firhad Hakim said there was “no question” of the arrested minister calling Mamata Banerjee as his phone was with the Enforcement Directorate.
In this episode of the Newshour Debate, Navika Kumar will be discussing the Bengal SSC scam. TMC minister Partha Chatterjee was arrested by the ED in connection with SSC Scam. After getting arrested, Partha tried to contact CM Mamata Banerjee, who ignored his calls. How Can TMC Distance Itself From Partha Chatterjee? Is TMC Fearing an Investigation? “Late-night calls were made to Chief Minister Mamata Banerjee, who was most likely sleeping.” TMC has nothing to do with finding cash.
“That person is not from our party; let ED find out,”, says Saugata Roy MP. “The diagnosis of the medical report has come & the diagnosis is positive for TMC-‘Too Much Corruption’, ‘tons and mountains of cash’, and ‘too many coincidences,” says Shehzad Poonawala. Watch the video to understand what the BJP spokesperson means by this remark. #bengalsscscam #mamatabanerjee #parthachaterjee.
(With Bureau Report).