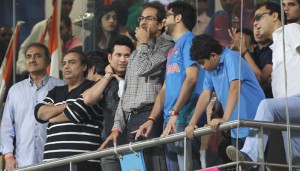 NEW DELHI: Along with cricket icons, industry bigwigs and Bollywood celebrities, there were 250 bureaucrats from Maharashtra were present at Mumbai’s iconic Wankhede stadium to watch India’s semi-final clash against West Indies on Thursday.
Mushfiqur Rahim taunts Team India after ICC WT20 exit, apologizes after backlash Interestingly, none of the bureaucrats had to spend a dime to occupy their rather expensive seats at the semi-final venue, reports.

While Mumbai cricket officials do not concede that these tickets are free, there is a 42-year-old agreement between the Maharashtra government and the cricket association that facilitates this generous ticket distribution process.

The agreement between the two parties was signed in 1974, whereby the cricket body agreed to pay for the stadium land in free tickets for every international match instead of cash.

“The place where Wankhede is today belongs to the state government. The government had then given the land to the Mumbai Cricket Association.
There is an agreement between them where a certain quota of tickets need to be given to the Maharashtra government. That is why 250 tickets have been given…According to BJP MLA Ashish Shelar and vice president of MCA there is a Government Resolution for the distribution also mentioned in the agreement,”
While Maharashtra’s chief secretary Swadheen Kshatriya sorted out free tickets for officials, Mr Shelar arranged for 200 tickets for the state’s assembly members in his ‘personal capacity’.
The Wankhede has a capacity of 33,000. Out of these, 14,000 tickets are handed to sponsors, players, officials and advertisers. Hence fans have to scramble for the remaining 19,000 tickets.
While the government’s argument is that 250 free tickets in a 33000-capacity stadium is a small number.But with tickets costing as much as Rs. 1,500 and 10,000, several fans were left disappointed to miss out on the India-WI semi-final.