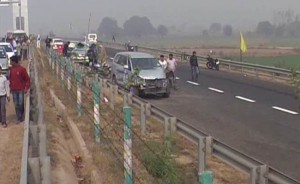 NEW DELHI: On a cold and densely foggy morning in Delhi, nearly 25 vehicles crashed into each other on a major highway near Delhi, killing two people. 25 people have been injured in the massive pile-up on the Yamuna Expressway.The wreckage from the battered cars was spread out over a kilometre at 9 am in Greater Noida.
Two tourist buses were a part of the pile-up on the Yamuna Expressway, which is used by commuters moving between Noida and Greater Noida, home to many offices and industrial areas. According to an eyewitness, the crash took place when a car crossed unwisely into another lane, possibly the result of low visibility, and collided with another vehicle. As cars behind slowed down, they bumped into each other.
The expressway was closed for several hours; it reopened at noon.