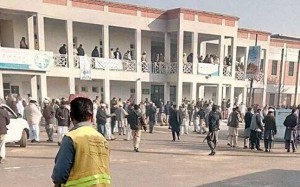 PESHAWAR (Pakistan) :  A group of terrorists stormed Bacha Khan University in Charsadda in northwest Pakistan on Wednesday using the cover of thick fog.
“Our four suicide attackers carried out the attack on Bacha Khan University today,” Umar Mansoor, a commander in the Tehreek-e-Taliban Pakistani (TTP) militant group told AFP by phone from an undisclosed location.Bilawal Bhutto Zardari Chairman Pakistan Peoples Party strongly condemns the terrorist attack on Bacha Khan University.
According to ‘AFP’, the operation has ended and the death toll in Pakistan university attack stands at 21 as of now. Meanwhile, Army continues to search block by block of the university.
Pakistan Tehreek-e-Insaf chief Imran Khan will visit Charsadda today.Reports say that Pakistani Army has confirmed that snipers have killed two more terrorists. Four terrorists killed so far.
Deputy Inspector General Saeed Wazir says 70 percent of students have been rescued. Tehreek-e-Taliban Paksitan claims responsibility for Bacha Khan University terror attack.
Pakistan Nawaz Sharif condemns the terror attack and said the sacrifice of the deceased will not go in vain. “We are determined and resolved in our commitment to wipe out the menace of terrorism from our homeland. The countless sacrifices made by our countrymen will not go in vain,” a statement issued on behalf of the Pakistan PM said.
Prime Minister Nawaz Sharif condemns university attack, says terrorists have no religion A group of terrorists stormed a university in volatile northwestern Pakistan on Wednesday; the gun battle with security forces lasted nearly two hours.
At least three students have been killed, said Deputy Inspector General Saeed Wazir to Reuters. He said that 70 percent of students had been rescued.Four terrorists have been killed after the army moved into the university, according to local media reports.
A Pakistani minister said that at least 20 were feared killed in the attack.According to media reports that 50 have been injured in the terror attack and have been shifted to Charsadda District HQ hospital.
3,000 students were present this morning on campus along with 600 guests attending a poetry recital.Police, soldiers and Special Forces launched a ground and air operation at the university.
Those who kill innocent students and civilians have no religion, said Pakistan Prime Minister Nawaz Sharif.
The militants, using the cover of thick, wintry fog, scaled the walls of the Bacha Khan University in Charsadda, in the northwestern Khyber Pakhtunkhwa province.They then opened fire on students and teachers in classrooms and hostels.
Television footage showed soldiers entering the campus as ambulances lined up outside the main gate and anxious parents consoled each other.Pakistan, which has suffered from years of militant violence, has killed and arrested hundreds of suspected militants under a major crackdown launched after a massacre of 134 school children in December 2014 in Peshawar.
Pakistan media reports that 60-70 students were shot in the head by terrorists.Speaking to Reuters, Deputy Inspector General Saeed Wazir said the Army and police had moved into the university and a gunfight with the attackers was under way. He said it was unclear how many gunmen were involved.One professor is reported to be killed in the attack.