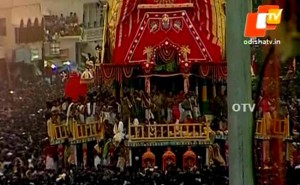 PURI (ODISHA):Two women were killed and 10 others injured in a stampede during the Rath Yatra in Odisha’s temple city of Puri today, police said.
The stampede occurred during the pulling of the chariots of the deities – Lord Jagannath, Balaram and Subhadra – between the market and Balagandi Chhaks areas.
“We came to know from hospital sources that one woman, about 65 years old, was killed while some have sustained serious injuries,” Director General of Police Sanjeev Marik told Reporters.Later, police said another woman died in the incident.
The police chief said two critically injured people were taken to the SCB Medical College and Hospital in Cuttack, while the others were taken to a hospital in Puri.