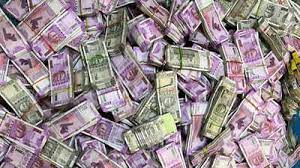 NEW DELHI/ KOLKATA: The Enforcement Directorate (ED) on Wednesday seized over Rs 15 crore in cash, gold ornaments, gold bars, property deeds and property-related documents during a raid on West Bengal teacher recruitment scam accused Arpita Mukherjee’s another residence in Kolkata suburb, Belgharia. This comes days after the agency seized Rs 21 crore cash from Mukherjee’s another residence, which it said was suspected to be the proceeds of the SSC scam.The officials had to break open the main door of the flat as the keys could not be found, reported Press Trust of India.
Sources said that the ED has recovered a huge amount of cash amounting to Rs 15 crore from Mukherjee’s another residence in Kolkata. Four counting machines were brought to Mukherjee’s flat in Belgharia, indicating that the amount might be bigger than the previous recovery when the agency found Rs 21 crore in cash from one of her residential premises. These machines were brought from SBI Regional HQ in Kolkata. Sources said besides cash, gold ornaments, gold bars, property deeds and property-related documents have been seized by the ED.
Arpita Mukherjee has reportedly told investigators that the money was kickback from the state’s massive teacher recruitment scam. She also said that only Partha Chatterjee and his men had access to the room where the cash was kept. They used to come once every 10 days.  “Partha used my house and that of another woman as a mini-bank. That other woman is also his close friend,” Arpita Mukherjee reportedly told investigators.

Earlier in the day, reports stated that Mukherjee claimed before the ED that Chatterjee used to stash money in her house and treat it like a “mini-bank”. Mukherjee reportedly has told the Enforcement Directorate that “all the money used to be stashed in one room where only Partha Chatterjee and his people entered. The reports also stated that Mukherjee has claimed that the minister used to visit her home every week or every 10 days. “Partha used my house and that of another woman as a mini-bank. That other woman is also his close friend,” Mukherjee said.

Meanwhile, Chatterjee who held the education portfolio on Wednesday countered repeated queries by the media on whether he would resign in view of his arrest by retorting why he should do so. He was approached by the media outside the ESI hospital at Joka in the city where he was taken this morning along with Arpita Mukherjee for a routine medical-check up before being interrogated by the ED. To repeated questions by reporters on whether he is considering resigning from the post of a minister, a visibly irritated Chatterjee shot back “What is the reason (to tender the resignation)?”
During his interrogation, Chatterjee, as reported by Newstrac24x7.com replied with “I don’t know”, “I can’t say” and “I can’t remember”. These were his standard responses to the ED. A group of investigating officers said the minister has been quizzed repeatedly on the school jobs scam since Friday. However, for the first time on Tuesday, Chatterjee said he wanted to cooperate with the ED officials, according to an ED source. Asked who gave the recommendations for job appointments, the minister’s reply was that “recommendations came from all levels”, said the source.

Sources say the ED also found more documents today that are being examined. During last week’s raid, the officials have recovered a diary with around 40 pages of notes that could provide crucial leads in the investigation. The ED has also recovered several deeds of properties that could implicate Partha Chatterjee. The ED officials had raided the house as part of their investigations. During questioning, Arpita Mukherjee has given information about all her properties. She has a couple of flats at Belghoria and another one at Rajdanga (in the southern part of the city.
Bengal’s Leader of the Opposition Suvendu Adhikari — once a close aide of Mamata Banerjee, has questioned why Partha Chatterjee is being retained as a minister despite his arrest. Adhikari met Governor La Ganesan at the Raj Bhavan and sought that Mr Chatterjee, who holds the industry, commerce and parliamentary affairs portfolios, be removed as minister.
(With Inputs from Kolkata Bureau).