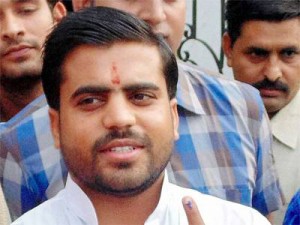 PATNA:Rashtriya Janata Dal chief Lalu Prasad’s son-in-law would be the star campaigner against him from the Samajwadi Party-led third front in Bihar poll. The SP on Monday released its first list of 19 party candidates for the Assembly poll.
“The son-in-law of Lalu Prasad and SP MP, Tej Pratap Singh Yadav, will be the star campaigner of the Samajwadi Party in Bihar poll and he would campaign against Lalu Prasad-Nitish Kumar’s grand alliance and the BJP-led NDA as well,” State SP chief Ram Chandra Singh Yadav said.
Tej Pratap was recently married to Mr. Prasad’s youngest daughter Rajlaxmi Yadav in Delhi. Tej Pratap is the grandson of Mulayam Singh Yadav’s elder brother Ratan Singh Yadav and is party MP from Mainpuri Lok Sabha constituency in Uttar Pradesh.
Akhilesh’s visit
U.P. Chief Minister Akhilesh Yadav will visit Patna on Tuesday for a review of the party’s election preparations. Denied the desired number of seats under the grand alliance, the SP had later formed a separate “third front” along with the NCP, the JAP of Pappu Yadav, the Samras Samaj Party of Nagmani and other smaller parties.

“Voters of Bihar who are against both the blocks will now have a choice this time to vote for the third front and we are sure that post-poll third front will emerge as the real power in Bihar,” Mr. Ram Chandra Singh Yadav told Reporters.
NCP leader and party MP Tariq Anwar too had expressed similar sentiment.
The party’s grapevine has it that Mr. Anwar may be pitched as the chief ministerial candidate of the third front, though it has not been formally announced yet.
First list released
Meanwhile, Mr. Ram Chandra Singh Yadav released the first list of 19 party candidates. His wife Nitu Chandra Yadav will be the party’s candidate from Bhabhua.
Party sources said that under the alliance, the SP would contest in larger number of seats falling in the border areas of Uttar Pradesh, while the NCP and the Jan Adhikar Party of Pappu Yadav would field their candidates mainly in Seemanchal (Kishanganj, Purnea, Katihar and Araria districts) and the Kosi areas of Saharsa, Madhepura and Supaul. The rest will be divided among other alliance parties.