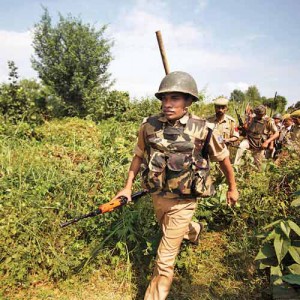 NEW DELHI: Haryana’s riot hit Atali village, where communal riots had erupted in May, wore a surreal look a day before India  prepares to celebrate Eid. Approximately 1000 security personals have been alerted by state authorities to stand guard to avoid untoward communal incidents.
An under-construction mosque , which is at the centre of this Hindu-Muslim dispute, and a school where more than 500 Muslim men and children are supposed to offer their prayers in the morning, will itself be guarded by personal of Border Security Force, Rapid Action Force and 10 cavalries provided by the local police.

On Friday afternoon, members of Muslim community offered their prayers at the mosque, while dozens of security personal kept watch, listening to the local Imam named Abid, sermonise a group of nearly 50 people.
“Live like a stranger or a traveler. The world is not ours to take,” Abid said. A BSF officer listening keenly remarks to his colleague, “Molvi Sahab sahi keh rahien hai.”
Moments later the prayers are over and men exit silently to be welcomed by Deputy Commissioner of police who confirms the set time of the Eid Namaz. “We will be here all night and all day. Nothing to worry about, said DCP Bhupinder Singh. While officials held meetings with the community promising them safety, many here still feel insecure.
“We only come here once a week on Friday instead of five times a day. But it is alright, all I  hope for is the Eid Namaz goes smoothly,” said Nazim Ali, a resident. He added that while heavy police presence causes inconvenience to the village residents, but it was their only option to maintain peace.
In total, two companies, each from RAF and BSF, and more than 600 police officials have been guarding the village since a minor riot broke out on July 10 in an already volatile area.
More than 500 Muslim men, women and children had fled their homes and taken shelter at a local police station for nearly two weeks when communal riots had hit their village on May 25. “We had made some arrests related to the riots after which one of the two communities are a little hostile towards us,” said a senior police official.
The village had ever since seen many minor flareups between the community due to a dispute over construction of a mosque . A local court had given a judgement in favour of the Waqf board stating that the land on which a mosque is currently being built belonged to the Waqf enraging the Hindu community members of which allegedly then went on a rampage.A review of the judgment is stated to take place on July 20.
Two months on, police barricades continue to divide the ‘Hindu areas’ from Muslim ones. Someshwar Sharma and Rinku, both residents, discussed among themselves the possible outcomes of a riot.
“Our lives continue to be disrupted. There are mischievous elements in every community but it is upto them to forgive and take their complaints back. We can live peacefully like we used to,” said Rinku. Ashvin, a class 6th student on Rawat Public school passes navigating through the heavy police presence.
When asked what he thinks about the situation in his village he responded,” I was afraid at first looking at the police but now I am getting used to it.”