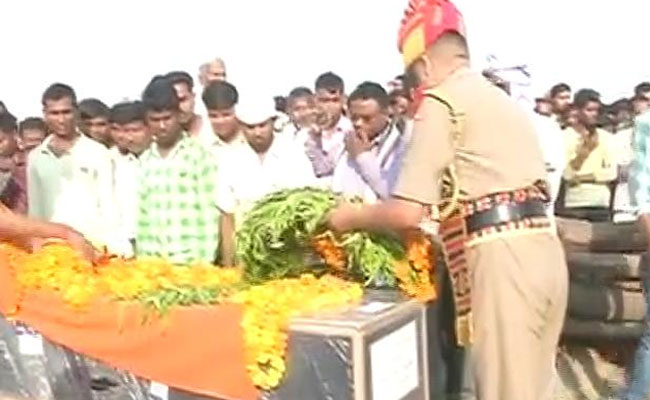 LUCKNOW :  Constable Prem Sagar, one of the two soldiers killed and mutilated by Pakistan at the Line of Control in Jammu and Kashmir on Monday, was cremated early this morning, 11 hours after his body was brought to his village in Uttar Pradesh’s Deoria. For several hours, the Border Security Force Jawan’s family refused to cremate his body until it was shown to them. They also demanded to speak to Chief Minister Yogi Adityanath.
The family finally relented after the Chief Minister called a little after midnight and spoke to the soldier’s older son. “He said he would visit us before the 13-day Shraadh ceremony…he also promised a school and a memorial in my father’s name,” he said.
Constable Sagar and Naib Subedar Paramjit Singh were part of a three-member patrol team that was near the Line of Control to check on a snapped communication line when they were ambushed by a Pakistani Border Action Team (BAT) that included army men and terrorists.

Their mutilated bodies were found around 8:30 on Monday morning. Top sources said they could have been decoyed there and there is a possibility that the terror group Lashkar-e-Taiba could have been involved in the attack, with the backing of the Pakistani army.”I want 50 heads for his sacrifice” said Constable Sagar’s daughter, holding her devastated mother.

Anger mingled with grief also at the village of Naib Subedar Paramjit Singh in Punjab’s Tarn Taran. His family refused to believe he was dead. Whose body is this? It is all behind (concealed in) this box” they said, pointing to the coffin draped in the national flag. “We are not being shown the body? Why?” they questioned.
When the soldier’s wife, Paramjit Kaur, insisted on a last look, she was distraught at the sight of the headless body. Their 12-year-old daughter asked a question that no one could answer: “Where is my father’s head?” India has warned Pakistan of an “unequivocal” response. Top commanders of India and Pakistan spoke on a hotline hours after Delhi warned that the army will exact revenge.