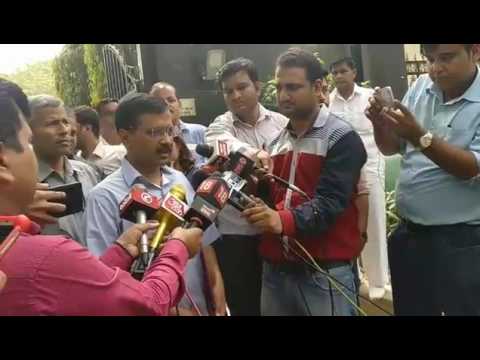 NEW DELHI : As his Aam Aadmi Party grapples with the stinging defeat in the Delhi municipal elections, Arvind Kejriwal today admitted that the party had “made mistakes”, adding that there was need to “introspect and course correct”.
The Delhi Chief Minister, who posted a short statement on Twitter this morning, said that based on his interactions with volunteers and voters in the last two days, it was clear that it was “time to go back to the drawing board”, adding that there was “need for action and not excuses”.
The remarks were a marked departure from the 48-year-old AAP chief’s shrill campaign, blaming rigged electronic voting machines or EVMs for the recent electoral blows that the party suffered in Punjab and Goa where he had campaigned extensively.In last week’s election to the municipal corporation in Delhi which it rules, the AAP came a poor second, managing only 48 of the 272 seats. The BJP swept the polls; results were counted on Wednesday.

As the party went into a huddle, top leaders came to the conclusion that it is, at this point, tough to compete against the “growing stature” of Prime Minister Narendra Modi, whose personal appeal to voters is seen as the main reason for his party’s huge score. The BJP, which held all three corporations of Delhi for the last 10 years, won them again – and with more seats.

At a post-mortem called on Thursday, AAP concluded that its rejection in the latest election was due in part to the “spillover effect” of the BJP’s gigantic result in neighbouring Uttar Pradesh last month. There, too, it was the Prime Minister whose appeal was unmatchable.

This month’s local election in the capital is the first that AAP contested – it was founded in 2012 and formed the government for the first time in 2014. After less than two months in office, Mr Kejriwal resigned in protest against his anti-corruption proposal being stalled by other parties. It was an impulsive decision that he later apologised for. In 2015, months after PM Modi was elected, elections in Delhi were called again and Mr Kejriwal pulled off a jaw-dropping result, with AAP losing just three seats in the entire city.