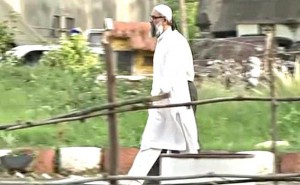 NAGPUR: Yakub Memon, who was hanged on Thursday morning, wept when he met close relatives a day ago, say sources in Nagpur Central Prison in Maharashtra.
Yakub Memon brother Sulemen Memon out side Nagpur Jail

On Wednesday, when his brother Suleiman came to meet him, Memon’s eyes were moist with tears, officials said. He also reportedly said his farewells to fellow prisoners and jail officials and said: “Forgive me if I did anything wrong.”
Sources say Memon did not allow any medical check-up by jail doctors, as is the rule for death row convicts. “I am fit, no need for a check-up,” he reportedly said.Early this morning, he read the Quran.
His last attempt at stopping his hanging failed when the Supreme Court, after a historic middle-of-the-night hearing, rejected his petition.Memon’s lawyers had argued that he should be given time after the rejection of his mercy plea, which was filed at 9 pm. President Pranab Mukherjee rejected it late last night.

The Supreme Court said it would be a “travesty of justice” to stop the execution of Memon, who was convicted for helping plan the 1993 blasts across Mumbai, which killed 257.