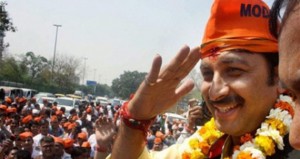 NEW DELHI : Bhojpuri superstar and BJP contestant from North-East Delhi Manoj Tiwari is unperturbed by criticism that he is a ‘parachuted’ candidate and says he would cut down on the number of films to devote more time and ensure development of his constituency.Exuding confidence, 43-year-old Tiwari says he wants to win his seat to help Narendra Modi become the Prime Minister and help the party achieve the target of 272 seats to form the government.
“I will do less films and devote more time for the people of this constituency. I don’t want to be called a villain after five years,” he said. Talking about his sudden entry into politics, the actor says he had shared stage with Anna Hazare when the veteran activist had sat on an indefinite strike in Ramlila to demand a strong Lokpal Bill. He said he had even shared stage with yoga guru Ramdev on the issue of black money.
“I have been an ardent supporter of these issues myself. I feel restless when prices of diesel and petrol escalate or when various scams come to the fore. I realised that I have this streak in me to do something for the society and that is how I am here,” he says.
“I want a strong Lokpal. I want that all the black money that has gone out be brought back to India and declared national assets. I want a corruption-free and inflation-free India. And I think Narendra Modi will be able to deliver on all these and make our dream reality,” explains Tiwari.
He claims North-East Delhi seat has received a step motherly treatment from Congress leaders and it is the most under-developed and neglected constituency. There are issues like traffic problems, shortage of colleges, open sewage lines and women’s security. “I want to develop this constituency and make it a model one if I get elected.”
When asked if there is a Modi wave in Delhi, the actor promptly replies, “There is Modi wave not just in Delhi but in the entire country.”  Then why did BJP fail to get absolute majority in the 2013 assembly elections? “Because the Aam Aadmi Party used the anger of Delhiites against Congress to garner votes by making false promises. But now the people are feeling cheated by AAP. People won’t fall for their lies and false promises anymore,” says Tiwari.
When asked who he feels is his main opponent, AAP’s AnandKumar or Congress’ J P Agarwal, Tiwari pauses for a moment before saying, “I think those who are determined not to vote for Modi will vote for AAP.” The actor doesn’t agree with views about his celebrity status having helped him earn the party ticket.