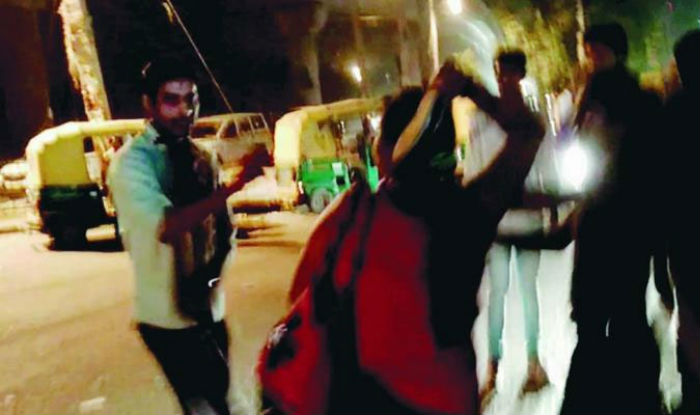 GURUGAON : A drunken man tried to molest a woman staffer at a Gurgaon-based pub and what followed was the brutal response from all the women employees at the bar started hitting the molester. The woman who was attacked started beating him with her slipper, and one of the bystanders captured the entire incident on video.

The video of the Gurgaon woman hitting the molester has instantly gone viral and has become a talking point. The video highlights the state of women’s safety in Gurgaon, where the number of rape cases has been on the rise.
The incident took place in MG Road, Gurgaon and the video shows the drunken man trying to grab the woman from behind. The woman responds by fighting the drunkard and hits him with her slippers. Soon the women staff of the pub joins her and thrash the man together with their slippers and hands alike. The video of the incident has gone viral on the social media and is being widely appreciated as the women were merely protecting themselves.
The video shows the drunk man grabbing the woman from behind after which she thrashed him with slippers.Soon after, some of her colleagues rushed to her rescue and started thrashing him with slippers.Eyewitnesses later alleged that there was no policeman around when the incident took place.

“We have deployed male and female constables in civil dress to take action against miscreants. We have issued strict directions to police personnel to file an FIR forthwith if the victim approaches police,” Manish Sehgal, Assistant Commissioner of Police (Crime) was quoted as saying by a News Agency. The man in question has not been arrested as yet.