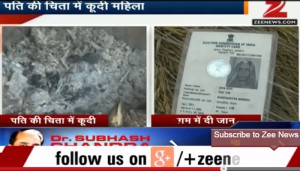 PATNA: In what could take us back to the dark days of India when social evils were rife, a woman in Saharsa district of Bihar committed suicide by jumping on the funeral pyre of her husband, reports stated on Sunday.
Deva Devi, who was residing in Parvania village​ in Saharsa with her husband Ram Charit Mandal, went into depression after she found her husband dead on Saturday morning. Escaping the attention of her relatives, she managed to reach the cremation ground where her dead husband’s pyre was still burning. She then jumped on the pyre and died.
“After prolonged illness, on December 13 my father died at 7:00 am. While we were attending the visitors, my mother was in shock and sitting in one corner. In the evening around 4:30 pm she went missing. Later, we found her burnt body along with my father’s dead body,” revealed her son.Police has registered a case and investigating in the matter.
In the medieval age, some Indian communities used to follow ‘Sati Pratha’ wherein widowed women immolated themselves along with their dead husband’s body. However, after many reforms and Acts, such social evils were eradicated from the society.