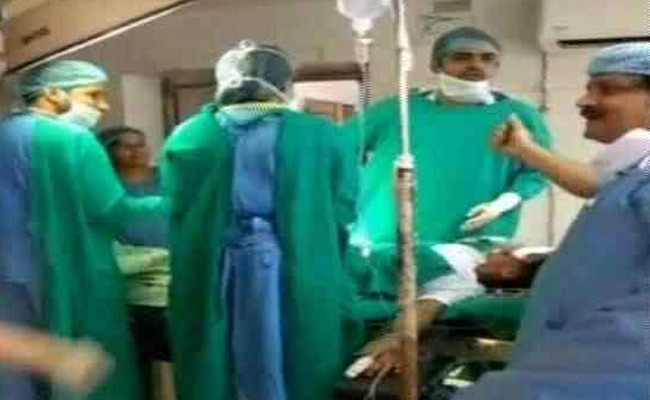 NEW DELHI : As a woman lay on the operation table for an emergency C-section, two doctors argued loudly, calling each other names and even threatening each other. They kept wrangling, the sedated woman between them, as one staff member surreptitiously recorded them on a mobile phone.
When one of the doctors – the obstetrician – finally delivered the baby at a hospital in Rajasthan, it didn’t survive long. The Rajasthan High Court has asked for a report by this afternoon on the incident that took place at the Umaid hospital in Jodhpur, the city’s biggest. The argument broke out between the doctors – Ashok Nainwal and ML Tak – during an emergency caesarean surgery scheduled because of the feeble heartbeat of the foetus.
The trigger, inexplicably, was Dr Nainwal, the obstetrician, questioning whether the patient had eaten before the surgery. The anaesthetist, Dr Tak, reportedly tried to have a junior doctor carry out tests, which Dr Nainwal didn’t agree with.
“You stay within your aukat (limits),” Dr Nainwal, in green scrubs and surgery gear, is seen shouting at the anaesthetist in the video clip. It quickly degenerates into shouting and name-calling, except the setting was not the streets but an operation theatre. A nurse and another doctor are seen trying to stop them and remind them that a surgery was on. Dr Nainwal and Dr Tak have both been suspended.

The hospital’s top medical officer said the baby died of “severe birth asphyxia” or breathing troubles and ruled out any lapse.”We recorded statements of all the staff present in the operation theatre. As far as the patient is concerned there was no lapse in treatment… The patient was operated within three hours of being admitted,” said Dr Ranjana Desai.
A hospital panel will investigate the conduct of the doctors, who have both been removed, said Ami Lal Bhatt, principal of the Medical College of Jodhpur, which runs the hospital. “This is condemnable… a violation of OT (operation theatre) discipline,” Dr Bhatt commented.ndtv.