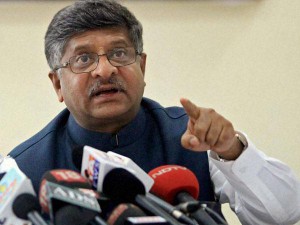 NEW DELHI: Union Minister for Communications and Information Technology Ravi Shankar Prasad on Wednesday said that the Centre is serious about the net neutrality issue and will strive to ensure the non-discriminatory availability of internet to the public.
“The government is serious about the net neutrality issue. The Telecom Commission will look into the recommendation of TRAI and then take final decision,” Prasad told ANI and other media here.
“My government will strive to ensure a non-discriminatory availability of internet for the people of India, particularly the young people. Internet is the finest creation of the human mind, but, in order to become truly global, it must have linkages with the local,” he added.
Earlier, Congress vice president Rahul Gandhi gave a notice for an adjournment motion in the Lok Sabha to discuss the issue of net neutrality.“So… I am going to mention a few words about that [net neutrality] in the Parliament,” Gandhi told media.
The Congress Party had earlier demanded that the NDA Government order the Telecom Regulatory Authority of India (TRAI) to scrap the regulatory framework paper under the Section 25 of the TRAI Act.
Net neutrality (also network neutrality, Internet neutrality, or net equality) is the principle that Internet service providers and governments should treat all data on the Internet equally, not discriminating or charging differentially by user, content, site, platform, application, type of attached equipment, or mode of communication. The term was coined by Columbia University media law professor Tim Wu in 2003, as an extension of the longstanding concept of a common carrier.
Due to intense lobbying by telecom operators like Airtel and Vodafone, the Telecom Regulatory Authority of India (TRAI) is planning to allow them to block apps and websites to extort more money from consumers and businesses — an extreme violation of net neutrality.
The TRAI has released a consultation paper with 20 questions spread across 118 complicated pages and wants the general public to use the e-mail route to give their views by April 24.
As of 2015, India has no laws governing net neutrality, which would promise all the internet users to be treated equally on the internet, not discriminating or charging differentially by user, content, site, platform, application, type of attached equipment, or mode of communication. There have already been a few violations of net neutrality in India by some service providers.
The TRAI consultation paper released in March this year was criticized for being one sided and having confusing statements. It has been condemned by both politicians and Indian internet users. As on April 18, over 800,000 emails have been received by TRAI demanding net neutrality. )