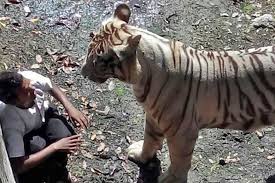 NEW DELHI : A young man was fatally mauled by a white tiger at the New Delhi zoo on Tuesday after he fell into a ditch in the animal’s enclosure and was unable to climb out to safety, witnesses said. The man, identified by police as Maqsood Khan, 20, was spotted by other visitors but the security personnel who came to the scene were not equipped with tranquilizer guns.

Anil Kumar, a spokesman for the police, said Khan was in the enclosure at the National Zoological Park for 10 minutes before he was killed. Bystanders used their cellphones to capture Khan cowering in the ditch, the tiger pawing at him and later seizing him by the neck and lashing his body back and forth, finally settling in a grassy corner with his prey. The witnesses complained that members of the security staff who came to the scene had not been able to help. ”
The initial first response team was one guard with a baton,” said one woman who described the events on camera. “Even after the guard came, they were focusing more on clearing the crowds than saving the man.” Amitabh Agnihotri, the director of the zoo, said that tranquilizer guns were stored at the zoo hospital, roughly 350 feet from the tiger’s cage. “We do have tranquilizer guns, but by the time we could organize them, he was dead,” he said.
In a written statement, Agnihotri said Khan had actually “crossed the standoff barrier of the white tiger enclosure” and that he had “jumped into the enclosure,” rather than fallen. The director said that the guard who had been posted there sounded an alarm and sent wireless SOS messages to other staff members. Employees “tried to divert the attention of the tiger from the visitor but to no avail,” he said. In his statement, Agnihotri said the enclosures of the zoo were “absolutely safe.
.” Three years ago, a female tiger at the zoo jumped over a 12-foot fence into an adjacent enclosure, prompting officials to temporarily close the park. According to news reports, it took the staff two hours to tranquilize the tiger and put her back into a cage. Zoos in India are regulated by a federal agency, the Central Zoo Authority, but are typically understaffed and overcrowded, said Bittu Sahgal, the editor of the wildlife and conservation magazine Sanctuary Asia. He said that officials often failed to register animal births or deaths publicly, and that supervision was scattershot.
Under existing regulations, Sahgal said, an episode such as Tuesday’s should have set off a fast-moving emergency plan.” If someone walked inside, or fell inside, there should have been tranquilizer guns, there should have been rifles, and it should have been three or four minutes,” he said. “The boy’s life should have been saved.”