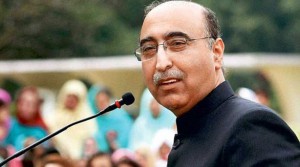 NEW DELHI: Ahead of Indo-Pak NSA-level talks, Pakistan on Friday said that it will not “abandon” the Kashmiris’ “legitimate struggle for freedom”, stressing that to have normal and cooperative relationship with India it was necessary to settle the decades-old dispute.
Pakistan’s High Commissioner to India Abdul Basit made the remarks in his address during an event here to mark Pakistan’s Independence Day
“Aspirations of the people of Jammu and Kashmir could neither be ignored nor put on the back burner. No matter how much more time their legitimate struggle takes, Pakistan will never abandon Kashmiris and their cause,” Basit said.
Asserting that “Pakistan has always wanted to have a normal and cooperative relationship with India,” he said, “To this end, it was necessary to settle all the outstanding issues, particularly the Jammu and Kashmir dispute to improve relations.”
National Security Advisers of India and Pakistan will hold talks on terrorism-related issues for the first time on August 23 in New Delhi, as decided in a meeting between Prime Minister Narendra Modi and his Pakistani counterpart Nawaz Sharif last month in Ufa in Russia.
During his brief speech after hoisting the country’s national flag at the Chancery amid a sudden spell of showers, Basit also dwelt on the challenges faced by Pakistan on the economic front and its “fight” against terrorism, saying that the country’s economy was showing “encouraging” signs of recovery.
“The China-Pakistan economic corridor was testimony to Pakistan’s potential and unparalleled opportunities the country offered for investment,” he said.
The Pakistan Prime Minister’s Advisor on National Security and Foreign Affairs Sartaz Aziz announced in Islamabad yesterday, “Yes, I can confirm it that I will be going to India on (August) 23rd for talks.”
India is expected to present strong evidence of terrorism emanating from Pakistan highlighted further by recent attacks in Gurdaspur in Punjab and near Udhampur in Jammu and Kashmir.
India’s case is bolstered by the capture of Mohammed Naved Yakub, a Pakistani national and a LeT operative, who carried out an attack on a BSF bus last week near Udhampur.
Interestingly, PM Narendra Modi had this morning greeted the people of Pakistan on their Independence Day.”Greetings and good wishes to the people of Pakistan on their Independence Day,” the Prime Minister said in a tweet.