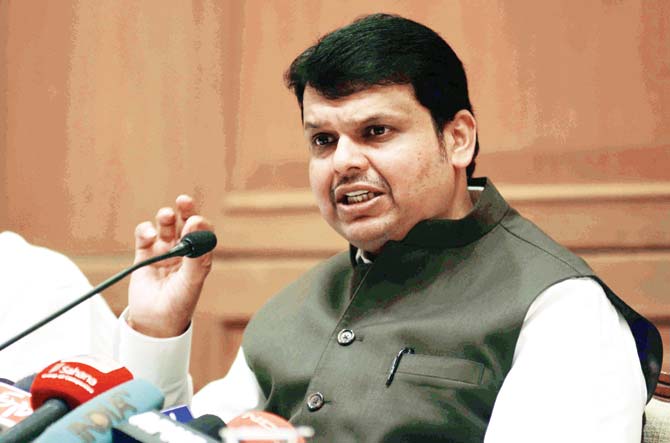 MUMBAI: Hours after Shiv Sena announced its candidates for the mayoral posts in Brihanmumbai Municipal Corporation (BMC), Chief Minister Devender Fadnavis said his party will not put up any nominees.
“We will not put up a candidate for mayor or deputy mayor posts in BMC,” Fadnavis said, adding “We will not be in the opposition, we will support the ruling party but will not compromise on transparency.”
Shiv Sena on Saturday announced its candidates for the posts of mayor and deputy mayor for the Corporation.Vishvanath Mahadeshwar has been selected for the mayor’s post while Hareshwar Worlikar will be his deputy.

In the recent civic body polls, Sena emerged as the single largest party with 84 seats, while BJP a close second with 82 corporators.
However, none of them has enough numbers to touch the half-way mark in 227-member council.
The party with the highest number of corporators can get its candidates elected for the two posts so long as other parties do not come together and put up joint candidates.
Mumbai Mayoral battle: NCP to stay away from Sena and BJP
After Geeta Gawli, who won as the candidate of the local outfit Akhil Bharatiya Sena pledging support to the BJP, the party’s effective strength has gone up to 83.
The party-wise strength in the 227-member council now stood at Shiv Sena 84 plus 4 (independents), BJP 82 plus 1, Congress 31, NCP 9, MNS 7, Samajwadi Party 6, AIMIM 2, ABS 1, Independent 1.

After Geeta Gawli, who won as the candidate of the local outfit Akhil Bharatiya Sena pledging support to the BJP, the party’s effective strength has gone up to 83.
The BJP-Sena relations, as partners in the state and central government, hit a new low in the backdrop of civic elections across Maharashstra, which saw the saffron parties contesting separately and hurling charges at each other.
The two parties have been together for nearly three decades but after the recent split, the Sena has even threatened that it may pull out of the BJP-led government in the state any time.

Meanwhile, Bala Nandgaonkar, former MLA of Raj Thackeray-led MNS, said that his party would be happy if a Sena Mayor gets elected. (With PTI inputs)