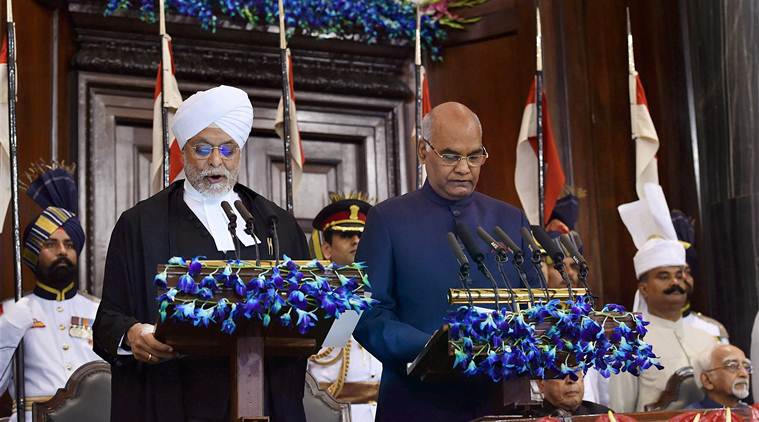 NEW DELHI : The two leaders then went to the grand Rashtrapati Bhavan Forecourt. President Mukherjee took the last salute of the President’s Bodyguard (PBG) with President-elect Kovind standing to his left. They then drove down Raisina Hill to the Central Hall of parliament in a black limousine. Escorting them was a grand equestrian procession by the PBG, dressed in white ceremonial uniforms and blue turbans.

The road from Rashtrapati Bhavan to parliament was lined with jawans of the armed forces. Mr Kovind, 71, was then sworn-in as President, becoming just the second leader from the oppressed Dalit community to get the job. A former lawyer and state governor, President Kovind was elected last week with more than 65 per cent of the vote by members of parliament and state assemblies.

Before his oath-taking, President Kovind, accompanied by his wife, paid his respects at Rajghat, the memorial dedicated to Mahatma Gandhi. “I grew up in a mud house, in a small village. My journey has been a long one, and yet this journey is hardly mine alone. It is so telling of our nation and our society also,” President Kovind said after taking the oath of office in parliament.

“For all its problems, it (nation) follows that basic mantra given to us in the preamble of the constitution — of ensuring justice, liberty, equality and fraternity, and I will always continue to follow this basic mantr. The 71-year-old was nominated by BJP in a move analysts say will help Prime Minister Narendra Modi tighten his grip on power and gain political capital ahead of his re-election bid in 2019.
The President can send back some parliamentary bills for reconsideration and also plays a guiding role in the process of forming governments.
While pledging to protect and uphold the Constitution, President Kovind promised to uphold the values of justice, independence and equality. Addressing members of Parliament and various dignitaries, including Chief Ministers and diplomatic corps, the President said, “We would be completing 70 years of our Independence soon. We are also well into the second decade of the 21st century, a century that so many of us intuitively believe will be an Indian century, guided and shaped by India and its accomplishments.

“We need to build an India that is an economic leader as well as a moral exemplar. For us, those two touchstones can never be separate. They are and must forever be linked,” he asserted.”The key to India’s success is its diversity. Our diversity is the core that makes us so unique. In this land we find a mix of states and regions, religions, languages, cultures, lifestyles and much more. We are so different and yet so similar and united,” the new President said in a speech in Hindi delivered just after CJI administered the oath of office to him in a brief but glittering ceremony in the Central Hall of Parliament.