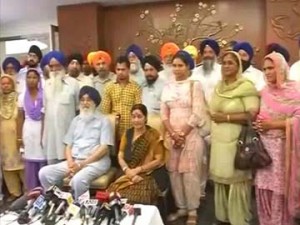 NEW DELHI : India today said it knows the location of 40 of its workers kidnapped near the captured Iraqi city of Mosul, as many of their family members today revealed they had talked about their abduction in phone calls till Sunday.”We are doing everything possible to ensure their safe return,” Foreign Minister Sushma Swaraj said after meeting the families of some of the workers.
The government said it is not clear, however, whether the workers are being held by the Sunni insurgent group ISIS – which has waged a war against the Iraqi government – or some other group.Workers of other nationalities are also being held captive along with the Indians, said foreign ministry spokesman Syed Akbaruddin.
Many of the Indians are from Punjab and worked for Baghdad-based construction company Tariq Noor al-Huda. Mr Akbaruddin said there has been no ransom demand yet.Among the busload of worried relatives who met the Foreign Minister were mothers and wives who carried photographs.
Ms Swaraj said, “We are doing everything a government should. We will leave no stone unturned in keeping our countrymen safe. I have only requested the families to keep praying and remain calm.” About 100 Indian workers are trapped in areas overrun by the Al Qaeda-inspired insurgent group ISIS, including Mosul, Iraq’s second largest city.
ISIS fighters who aim to establish a Muslim caliphate across the Iraqi-Syrian frontier have seized large swathes of territory while advancing towards Baghdad. The discovery of where the Indians are being held came on a day some of their families recounted that they had spoken about being kept in an “unknown location.”
Dharmender called his family in Punjab on Sunday to tell them he had been kidnapped. The conversation was cut off abruptly. Now his mobile phone keeps ringing but no one answers it,” says his father, Rajkumar.Kamaljeet’s family received his call last on Tuesday. Kamaljeet told his brother Parminder that some 91 people were rounded up by armed militia, segregated, and taken away in a truck.