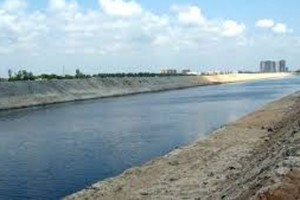 CHANDIGRAH: Punjab has decided to defy a Supreme Court order in its clash with Haryana over sharing water from the river Sutlej.The Punjab assembly passed a resolution moved by Chief Minister Parkash Singh Badal, which said that it “would not abide by any order against its interests on water.”
The Supreme Court had yesterday stopped Punjab from returning till March 30 nearly 4000 acres of land acquired for the Sutlej-Yamuna canal to farmers.The opposition Congress and the ruling Akalis, who govern Punjab in a coalition with the BJP, have combined to clear legislation to give back the land.
Punjab Governor Kaptan Singh Solanki has not signed the proposal, but politicians have defied all rules to start filling up the canal with mud to ensure it cannot be used to route water to Haryana. Neither the police nor administration officials have dared to stop them.

The canal has been constructed in fits and starts over the last few decades for nearly 700 crores, with Haryana paying for most of it.  Politicians have defied all rules to start filling up the canal with mud to ensure it cannot be used to route water to Haryana.

Under a decades-old agreement, water would be shared with Haryana via the canal, 85 per cent of which has been built already.Delhi has also been drawn into the controversy.

Delhi Chief Minister Arvind Kejriwal, whose Aam Aadmi Party or AAP is coveting big gains in the election in Punjab next year, recently said that the state does not have enough water to share with Haryana.Haryana in turn, warned him in a trenchant letter to get “your own canal constructed.”
Reacting to the letter from Haryana, Kapil Mishra, a Delhi minister, said, “Haryana cannot decide whether Delhi gets water. This is decided by Supreme Court judgments.”
Many observers predict that if Punjab is allowed to get away with the filling up of canals with mud in order to block the flow of water, it could set a dangerous precedent for other parts of the country and threaten federal unity with inter-state battles for waters that ignore the law.