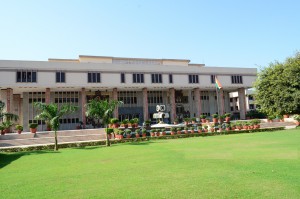 NEW DELHI: A daily wage earner has sought a compensation of Rs1 crore from the Delhi government and its agencies for the death of his nine-year-old boy, caused by their alleged negligence in keeping underground water reservoirs wide open.
Justice Rajiv Shakdher of the Delhi High Court has on the boy’s father’s plea issued notice to the Delhi government, Delhi Police, North Delhi Municipal Corporation (NDMC), Delhi Fire Services, and Delhi State Industrial and Infrastructure Development Corporation Ltd. (DSIIDC) and sought their response by September 29.
The daily wager, Naval Kishore Shah, moved the high court seeking action against erring officials responsible for the death of his son and to secure directive to cover all open pits across public places in Delhi so that such an unfortunate incident does not recur in the city.
Advocate Kush Sharma appearing for Naval Kishore Shah told the court that on April 30 this year his son went to play in a park near Badli Industrial Area at 6.30 pm and when he did not return home by 8.30 pm the parents along with relatives and neighbours searched for him in the vicinity of the park.
The park has 12 pit holes which are 20-50 feet deep and only three of them are covered, the plea said. It added that the water in the reservoir was used for filling up the fire extinguishing tankers of the Delhi Fire Services.During the search for the boy, the people suspected he fell into the pit. When they approached police for help, instead of taking immediate action, police showed insensitivity and registered an FIR for kidnapping.
However, after the parents and relatives of the boy protested, a sub-inspector from the police station went to the park and inspected the pits with a bamboo stick to see if the boy was inside, it said.Later, one fire brigade official along with another police officer without any proper equipment searched for the child by poking an iron rod in the tank, the plea said.
Thereafter, the fire brigade department brought a pump to empty out the tank, which was filled with water, to look for the boy but the pump was dysfunctional.Dissatisfied with the rescue operation, the parents of the boy arranged for a private pump and a submersible pump to empty the tank.
“Since it was dark, police and fire brigade authorities refused to enter the tank. Then two of the relatives risked their lives and went inside the tank without any safety equipments. It was the duty of the Delhi government and its departments to search for the boy,” the plea said.”The officials of various respondent departments were just a mere spectator and did not even bother to help the petitioner or his relatives,” Mr Shah told the court in his plea.
Advocate Sharma said the fire brigade department failed in its duty to take reasonable care of the passersby of the park. The DSIIDC, which owns the park, also displayed negligence and is responsible for the incident which resulted in the death of the child, he added.