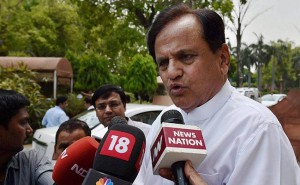 NEW DELHI: “If I am guilty, let them hang me,” Ahmed Patel said after BJP leaders accused him – along with his boss, Congress president Sonia Gandhi – of corruption in a deal for the government to buy 12 helicopters for 3,600 crores from manufacturer AgustaWestland, whose parent company is Italian.

In  Italy, where a court has concluded that bribes were paid for the contract, prosecutors argued that Mr Patel is the “AP” referred to a note seized from middlemen and top executives of the helicopter manufacturing firm in which they were budgeting for the likely amounts they would have to pay to different individuals to land the India contract.
Mr Patel told reporters today that just the initials “AP” cannot serve as indictment. “What proof is there that AP is Ahmed Patel? There are many APs out there,” he said, daring the BJP to provide evidence of his involvement in the scam. But the BJP says that the extrapolation makes perfect sense, given that other documents referred to in Italy mention the need to lobby “Signora Gandhi” because she is the “driving force” of the decision to buy 12 new helicopters.
The Agusta helicopters were to be used by top politicians including the Prime Minister and Mrs Gandhi, but the deal was cancelled in 2014 after Italy began investigating executives for paying kickbacks abroad.  The CBI has been assigned to determine who received the money- it has alleged money was given to former Air Force Chief SP Tyagi, who has been sharply indicted in the Italian verdict.

Mrs Gandhi, who counts Mr Patel among her closest aides, said today, “I have done nothing wrong” after the Agusta scandal took centrestage in parliament with the BJP accusing her, Mr Patel and former Prime Minister Dr Manmohan Singh of primary roles in the scam.