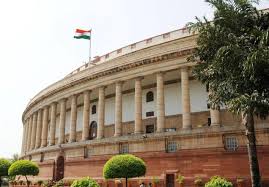 NEW DELHI : The Lok Sabha will on Wednesday vote on the National Judicial Appointments Commission Bill, 2014, which is likely to have a smooth passage in the Lower House as the Congress is likely to vote for it.  The voting comes after the Narendra Modi government, which is keen to scrap the existing collegium system, on Monday introduced a Constitution Amendment Bill in Lok Sabha to establish a six-member body for appointment of judges to the Supreme Court and the High Courts.
The opposition Congress has decided to back the  bill to change the system of appointing judges in the Lok Sabha today, but with riders. Congress leaders including Sonia Gandhi have decided to move amendments in the Judicial Appointments Commission Bill to change a provision that it believes gives veto powers to the ruling party.
It is too late to move amendments in the Lok Sabha, but the government still may not have it easy. Congress members have raised strong demands to push up a discussion in the house on communal violence and they continued to protest and shout slogans after Speaker Sumitra Mahajan didn’t allow it.
The Congress’ demand for a debate on rising communal violence drove an unusually aggressive Rahul Gandhi to the well of the House in protest last week. The party says it wants a guarantee on the debate before voting on the judges’ bill in the Lok Sabha.
In the Rajya Sabha, where the ruling coalition is in a minority, the Congress will move amendments to the bill that sets up a six-member national panel to select Supreme Court and High Court judges, currently picked by a collegium of five of the country’s senior-most judges.
The proposed commission will be headed by the Chief Justice of India and will have as its members, two judges of the Supreme Court, the Union Law Minister and two eminent jurists. The bill says if two members object, a judge can be dropped from consideration as the decision has to be unanimous. This provision was missing in the version of the bill introduced in the Rajya Sabha by the previous Congress-led UPA government last year, which has now been withdrawn. The Congress says as a member, the Law Minister can also block an appointment.

The BJP and its allies have a comfortable majority in the Lok Sabha but they need the backing of the Congress in the Rajya Sabha.