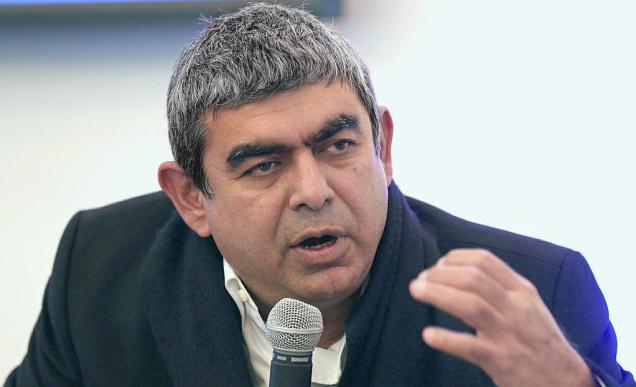 The Board of Directors of the country’s second largest software exporter accepted his resignation “effective immediately,” a statement issued by the company said. Mr. Sikka has been appointed executive vice chairman effective Thursday and will hold office until a permanent chief executive officer and managing director takes charge, which should be no later than March 31, 2018, the statement said.

Sikka has been appointed as executive vice chairman in a newly created position, Infosys said in a notice to stock exchanges on Friday morning. Infosys said that the company’s board had accepted Sikka’s resignation during a board meeting held on Friday.

“In his notice of resignation to the Board, Dr. Sikka reiterated his belief in the great potential of Infosys, but cited among his reasons for leaving a continuous stream of distractions and disruptions over the recent months and quarters, increasingly personal and negative as of late, as preventing management’s ability to accelerate the Company’s transformation,” said Infosys.

Narayana Murthy on Friday said he was ‘extremely anguished by the allegations, tone and tenor of statements made by the board, it below his dignity to respond to baseless insinuations. Sikka’s resignation comes a day after Mint reported that Infosys Ltd founder N.R. Narayana Murthy had claimed in an email to some of his advisers that he had been told by at least three independent directors of the company that Vishal Sikka was more chief technology officer (CTO) material than chief executive officer (CEO) material.

“I want to thank Vishal for his commitment to ensure a smooth transition and his commitment to a seamless experience for our clients. Pravin is a veteran Infoscion with deep knowledge of the business, and his long experience in the Company will help ensure a smooth transition,” said Infosys co-chairman Ravi Venkatesan. Shares of Infosys Ltd on Friday fell as much as 9.3%, its steepest fall since over 13 months. Investors lost over Rs20,000 crore market capitalisation on the news.

“The Board understands and acknowledges Dr. Sikka’s reasons for resignation, and regrets his decision. In particular, the Board is profoundly distressed by the unfounded personal attacks on the members of our management team that were made in the anonymous letters and have surfaced in recent months. As the Board has previously stated, a series of careful investigations found no merit to the unsubstantiated and anonymous allegations that had been asserted.
The Board denounces the critics who have amplified and sought to further promote demonstrably false allegations which have harmed employee morale and contributed to the loss of the Company’s valued CEO,” Infosys added. Infosys also said that a succession plan is being put in place and the company will conduct a search to replace Sikka at the helm of the company. Infosys said Sikka would continue “to focus on strategic initiatives, key customer relationships and technology development” and report to the company’s board in his new role.
“The succession plan for appointment of a new Managing Director and Chief Executive Officer has been operationalised by the Board and a search for the same has been commenced,” said Infosys in the statement to stock exchanges.  Sikka’s resignation comes after he has been caught up in turmoil at Infosys over the past one and a half years during which the company’s founders and the board has been at odds with each other. During this period Infosys, has also been caught up in several internal investigations related to the company’s acquisition of Panaya and a large severance payout to former chief financial officer Rajiv Bansal.

The disagreements between the founders and the board started in February last year when the board decided to give Sikka a 55% pay hike to $11 million. Only 23.57% of promoter votes were cast in favour of reappointing Sikka as managing director and CEO in April last year. Since October 2015, Infosys has hired external law firms to undertake three investigations and also conducted an independent valuation of Panaya.
R. Seshasayee, chairman of the Board, said: ”Vishal has made a seminal contribution to the transformation of Infosys, and he will be remembered for infusing a refreshed sense of direction,
Mr. Sikka will receive an annual salary of $1 during his tenure as executive vice chairman. The Board has mandated the chairman and the Nomination and Remuneration Committee to expeditiously identify and select a permanent CEO and managing director, the statement said.
“I started my journey as the CEO of this iconic company with a mission to transform it on the basis of software, especially [artificial intelligence], and innovation, enabled by education.”

“Three years later, I feel proud of our progress and achievements, from profitable revenue growth to rapid purposeful adoption of software, new services, and grassroots innovation, to the extraordinary recognition from our clients worldwide.
“I am deeply grateful to our Board for providing me with strong support and guidance, and especially wish to thank our chairman  for his extraordinary and thoughtful stewardship, and look forward to working together on a smooth transition. ”
Ravi Venkatesan, co-chairman of the Board, said: “I want to thank Vishal for his commitment to ensure a smooth transition and his commitment to a seamless experience for our clients. Pravin is a veteran Infoscion with deep knowledge of the business, and his long experience in the company will help ensure a smooth transition.”( with Agency inputs)