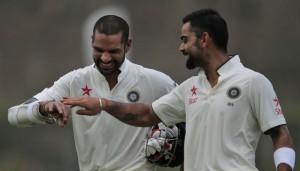 GALLE: Skipper Virat Kohli and opener Shikhar Dhawan slammed classy centuries as India took firm control of the first cricket Test against Sri Lanka by taking a substantial 192-run lead first innings here on Thursday.
In reply to Sri Lanka’s paltry first innings score of 183, India scored a decent 375 in 117.4 overs, courtesy Kohli’s 103 and Dhawan’s 134, as they laid the foundation Witha 227-run stand for the third wicket on an eventful second day.
Sri Lanka were were tottering at 5 for 2 in their second innings, still trailing by 187 runs.Glovesman Wriddhiman Saha’s (60) maiden Test half-century also went a long way towards India stretching their lead close to 200 runs.
For Sri Lanka, their off-spinner  Tharindu Kaushal was the most succcessful bowler with figures of 5/134 in 32.4 overs. Pacer Nuwan Pradeep chipped in with 3/98.Ravichandran Ashwin, opening the bowling, castled Dimuth Karunaratne (0) with a doosra.
With skipper Kohli employing adouble spin attack, Amit Mishra’s googly breached Kaushal Silva’s defence to leave the islanders in a daze.
With three full days left, the hosts face a daunting task to save the game and prevent India from taking a 1-0 lead in the three-match series.With the strip reasonable turn and odd balls keeping low, the visitors would like to drive home the advantage with their champion spinner Ashwin in prime form.
While India got a good lead, they could not score at a very quick clip as they managed 247 runs during the 83.4 overs that they batted on second day.However credit should be given to both Kohli and Dhawan as the Lankan bowlers failed to make any inroads in the first session of the day.
While Kohli faced 191 balls for his 103 that had 11 boundaries, Dhawan also showed loads olf patience during his 273-ball-134 that had 13 hits to the fence.For the Indian captain, this was his 11th Test hundred while his Delhi teammate helped himself to his fourth ton and second in successive Test matches.
Starting the day at 128 for two, the duo slowly and steadily paced their innings playing both pacers and spinners comfortably.The innings of 60 will give Saha, the much-needed confidence as he failed to break the deadlock of reaching a batting landmark.
He also showed good temperament while batting alongside the tail-enders. Credit should also go to Ishant Sharma, who hung on commendably to Saha and kept blocking out deliveries.
Ishant might scored only 3 runs but more importantly consumed 39 deliveries which also gave Saha the confidence required to play his strokes.
He went from 42 to 50 with a couple of boundaries. First it was slog sweep off Kaushal, that went through to the boundary and his maiden Test half-century came with a perfectly timed pull-shot off Pradeep. He took 98 balls to reach the landmark.
But Saha was given out wrongly off a bouncer by Nuwan Pradeep (3-98) although replays showed the ball had bounced off his helmet as he tried to hook the bouncer.Varun Aaron (4) was last man out, as Kaushal picked up a five-wicket haul.
While India are well and truly on their way to winning the Test match, the only thing that would be bothering Kohli will be the fact that seven Indian players were out without reaching the personal score of 20.
Among the Sri Lankan bowlers, offie Kaushal was the most successful but at the same time bowled atleast one half-olley or a loopy full-toss per over.Prasad and Pradeep bowled their hearts out but with a such low first innings score to defend, it became an onerous task for the them.
Young Pradeep however bowled a fiery spell with the second new ball as he troubled the Indian lower-order.He had literally kept Dhawan quiet before he was finally played on while Ashwin got an incutter.