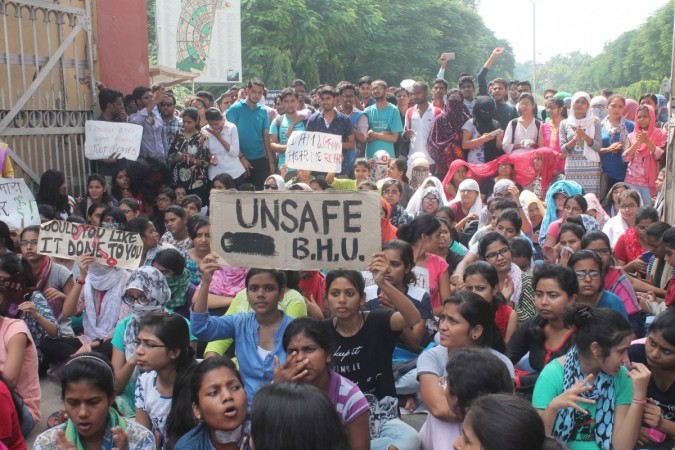 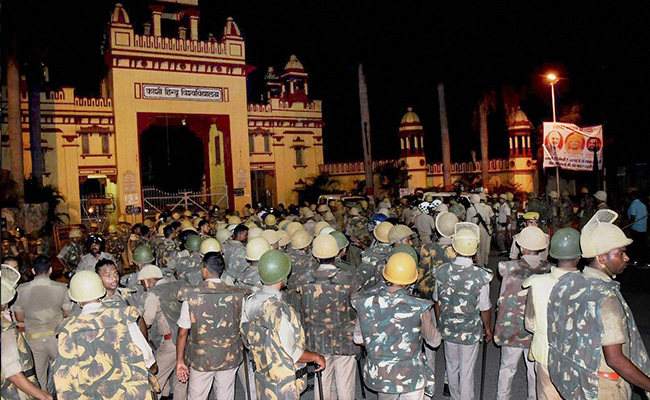 VARANASI : Protests over an alleged molestation case of a first year student at Banaras Hindu University (BHU) turned violent on Saturday night with police resorting to lathicharge to disperse the crowd.
A cellphone video has emerged that shows two policemen raining blows on a woman student of the Banaras Hindu University, drawing sharp criticism of the police handling of a student’s protest on the campus. The use of force took place last night as the students made yet another attempt to meet the vice chancellor to discuss the question of women’s safety in the campus.

The video shows policemen charging towards the protesting women near the hostel gates. All the women except one run inside. A policeman pushes the woman, who falls to the ground. Then two others begin thrashing her with batons. No woman constable can be seen in the footage. The students say the police used force without any provocation and even tried to enter the women’s hostel.

While some miscreants tried to set fire on public property and pelted stones, police and paramilitary forces then allegedly beat up several protesters and marched onto the campus. Several videos have surfaced showing male police personnel and PAC officers brutally beating up girls and barging into the girls’ hostel. Media personnel covering the event were also caught in the clashes.

According to the victim’s complaint to the chief proctor, she was returning to her hostel from her department at around 6:20 pm on
Thursday when near the Bharat Kala Bhawan two men on a motorbike came from behind and molested her before speeding away. “As it was dark, I could not see the number on the motorbike,” the second-year BFA student said.

She claimed that she cried out for help but the security guards, who were a few metres away from her, ignored her. Later, when the student approached the guards along with her hostel mates, the guards allegedly responded with misogynist remarks and snubbed her for not walking carefully while moving alone in the dark.

The students who have been protesting over two days, refused to lift their dharna near the front gate, even as Prime Minister Narendra Modi was visiting the city on Saturday and was supposed to pass by the prestigious university. The girls wanted to draw his attention to the persistent problem at BHU, of lack of security, sexual harassment inside the campus and ‘victim shaming’.

As soon as the news of lathicharge spread on Saturday night, students from other hostels also joined in and the situation went out of control. The protesters took to stone pelting and arsoning on the campus. The police also fired in the air to disperse the agitators.

The female students alleged that the police thrashed and pulled them by their hair, even as the Varanasi district magistrate, who was present on the spot, denied the claims. Banaras Hindu University (BHU), one of the premier higher educational institutions of India, is on the boil since Saturday night, with police reportedly lathi-charging students protesting molestation on the campus.

Ironically, the girls continued with their protests even as Prime Minister praised Yogi Adityanath’s six months in power, who had started the anti-Romeo squads to protect women from harassment.

The university administration, however, termed the protests as politically motivated. Professor O N Singh, Chief Proctor at BHU, said, “Efforts are being made to restore normalcy on campus and ensure safety of the students”.

Meanwhile, several students’ body organisations, in solidarity with the BHU students, staged a protest at the GPO in Lucknow on Sunday morning. There were also reports of protests by some others at the official residence of CM Yogi Adityanath on Sunday against Saturday night’s lathicharge.

A protesing student told  few girls were taken to hospital for treatment of their injuries. Sources in the university say that the situation has been deteriorating in the last several months, with cases of sexual harassment.
The student also alleged that apart from facing-victim blaming, her character was also questioned when she informed the hostel warden about the incident. Furious over the inaction, students staged a demonstration at the BHU gate, holding placards that read, “Stop victim blaming,” and shouted slogans against the university administration. The victim also joined the demonstration and shaved off her hair in protest.

Students  demanded that the vice-chancellor meet them in person at the protest site and assure them of action against the culprits, after their complaints to the warden and the chief proctor bore no result.

Ramayan Patel, convenor of the Joint Action Committee of the BHU students, demanded strict legal action against the culprits and action against the “irresponsible” security personnel, lighting up of all the dark zones in the campus and continuous roundup of guards and installation of CCTV cameras.

When contacted, BHU vice-chancellor Girish Chandra Tripathi dismissed the incident saying that he was yet to receive a formal written complaint from the alleged victim.  “I have been asking them for a written complaint since morning but got nothing from them. We are ready to take action but let the students approach us first. They are staging a dharna on the street. That is not the right way.

Roshan Pandey, a third-year B.A student, who was a part of the protest, said: “We submitted our complaint to the VC through the delegation he sent but he has not appeared himself. The students demand that he come before us. The movement will continue till then.”
Meanwhile, Chief Minister Yogi Adityanath has ordered an inquiry and asked the Varanasi commissioner to submit a report. BHU Vice Chancellor Girish Chandra Tripathi has promised action and said installation of CCTV cameras is under process.

Congress Vice President Rahul Gandhi said the police violence was the “BJP version of Beti Bachao, Beti Padhao in BHU”.  Former UP Chief Minister Akhilesh Yadav tweeted, “Lathicharge on BHU students is condemnable. The government must find solutions through talks and not force. There should be action against those involved.”
Senior JD(U) leader Sharad Yadav said it has never happened at BHU. “We will raise the issue in Parliament… It is intolerable in a democracy and the government should apologise,” he said. (with Agency Inputs ).