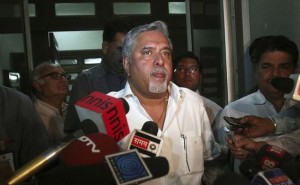 NEW DELHI: Till three months ago, tycoon Vijay Mallya appeared under no pressure to pay back nearly a billion dollars of loans accrued by his Kingfisher Airlines. Even after he was declared a “willful defaulter” by the State Bank of India, Mr Mallya held a blowout birthday party in December at his famous Goa villa, with about 200 guests, a fireworks display, and pop singer Enrique Iglesias as the headline act.
Now, regulators, banks and the judiciary are all chasing Mr Mallya, whose departure from India was reported a week after he flew to London by Attorney General Mukul Rohatgi. SEBI, the markets regulator, has begun an investigation to determine how and why Mr Mallya was cleared of financial violations charges by Britian’s Diageo. In 2013, the maker of Johnny Walker whiskey paid about $1 billion dollars for about 55 per cent of Mr Mallya’s United Spirits, which was a part of his UB group.
In April last year, the United Spirits board begun a process to remove Mr Mallya as its chairman due to alleged financial irregularities worth nearly 1,300 crores including the siphoning of money to other companies he owned. Mr Mallya had denied the allegations and refused to resign.
After lengthy hostilities, Diageo said last month that Mr Mallya was innocent of financial wrongdoing and pink-slipped 75 million dollars or 515 crores, in return for which  the businessman agreed to give up his chairmanship and board position. Under the new arrangement he has been redesignated founder emeritus of the company.
A spokesperson for Diageo confirmed, “We have received a request for information from SEBI and will of course cooperate with them.”
Mr Mallya, who tweeted this morning that he is not absconding, has been asked to appear in Mumbai next week for questioning in a money-laundering case. Separately, the CBI is investigating how state-run banks sanctioned enormous loans to Kingfisher Airlines without commensurate security despite as it hit financial ruin.