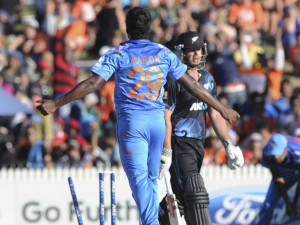 Former Indian skipper Sourav Ganguly felt India should have opted for the extra pace of Varun Aaron to replace the injured Mohammed Shami for the home series vs Sri Lanka. Shami, who is out with an injured toe, made way for Mumbai medium-pacer Dhawal Kulkarni for the first three ODIs.
Talking to GoCricket about the selection, Ganguly said, “Dhawal Kulkarni has been picked but I would have really wanted to see Varun Aaron play the ODIs. He’s got pace and he needs to be kept in the side and nurtured to make him a better bowler.”
Ganguly felt that a few extra yards of pace of Aaron would have made the difference for India on flat, dry wickets at home.”I really wanted to see him on the flat, dry wickets in the series where a little bit of extra pace is necessary. Umesh Yadav will bowl with a lot of pace, Bhuvneshwar Kumar will get the ball to swing but I think Aaron would have been an ideal replacement for Shami.”
“Last time we saw him [Aaron] play international cricket was in the last two Tests in England and he hasn’t played after that, which is hugely surprising for me.He played one Duleep trophy match where he looked completely out of match practice,” Ganguly added.
“If he has to stay fit, he has to bowl a lot in match situation. He cannot get fitter by sitting at home and lifting weights in the gym.”Ganguly also felt that India, in the absence of skipper Mahendra Singh Dhoni, will be tested by a much-improved Sri Lankan side.
“It’s an important tournament. India will be tested. Sri Lanka are a far better side than West Indies. Sri Lanka have proved with their wins in England – in both ODIs and Tests – that they’re a much-improved side. Dhoni’s absence will be a leveller.”
Dhoni’s unavailability also gives reserve wicketkeeper Wriddhiman Saha an opportunity to prove his credentials and Ganguly thinks Saha should grab it with both hands. “It’s a good opportunity for Wriddhiman Saha, who has been in the shadow of Dhoni for a long time. He will get a chance to prove his credentials. It’s difficult for a player who is constantly in and out of the side.  Saha will get these five games to tell the selectors that he is the number two wicketkeeper in the country at the moment,” said the former India captain.
The five-match series, that kick-starts India and Sri Lanka’s preparation for World Cup 2015, begins at Cuttack on November 2.